On a somewhat recent episode of Dog the Bounty Hunter, Dog and his posse went chasing down a fugitive in some dense forestry-looking area on our `aina. Upon closer examination, I recogmatized um as da place we biked back in August: The Pearl Harbor Bike Path. What better time to write about it for y’all right?

Now I need to start with a disclaimer. If being on Dog the Bounty Hunter is any indication, there could conceivably be certain areas of the path that may be viewed as “shady” to some. For parts of the ride, wifey kept saying that it probably wouldn’t be safe for people to run/ride by themselves. Personally, I felt perfectly fine, but that’s probably because I’m the proud owner of this intimidating gun show (*flexes*). 😛 All kidding aside, if you don’t feel safe or feel like you can’t protect yourself, take some friends along if you choose to do this path.

With that outta the way, let’s get a rollin’!

I’ve read reports that the trail can be anywhere from 8 to 18 miles or more, spanning the areas between Aiea to Waipahu to even Nanakuli! I guess it just depends where you decide to start and how far you wanna take it (see map from the DOT. Our particular adventures started from Aiea and went to Waipahu and back. Check it!

Depending on where *you* decide to start, the parking sitch may not be the greatest. We opted to start on the Aiea Bay State Recreation Area side, which meant finding parking in the surrounding neighborhoods near Aloha Stadium (to the chagrin of those living in the area). Note: We later discovered that there is actually a parking lot for the park (recreation area) if you enter in through McGrew Loop off Kamehameha Highway (view Google Street View). Whether or not you trust your car parked there – while people watch you unload your bike and ride off – is up to you.

So if you parked in the Aloha Stadium area like we did, just make your way north, down Kamehameha Highway and take a left at this little side street with no name (Google Street View). That will lead you to the Aiea Bay State Recreation Area and beginning (southeast portion) of the Pearl Harbor Bike Path. 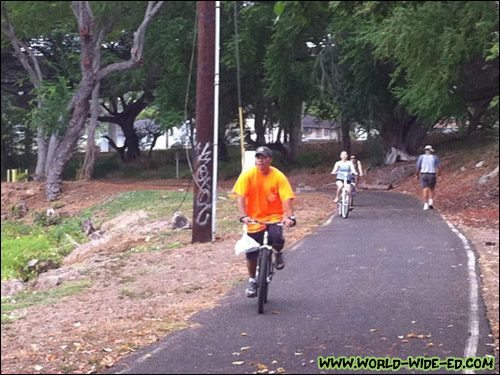 (That’s a photo of my friend Jay at the Aiea Bay State Recreation Area on the return trip. Sorry, I didn’t have any photos of us going in the other direction.)

As you start your journey, you will actually travel under a portion of the Moanalua Freeway (HI-78), giving you a neat, not often-seen perspective. 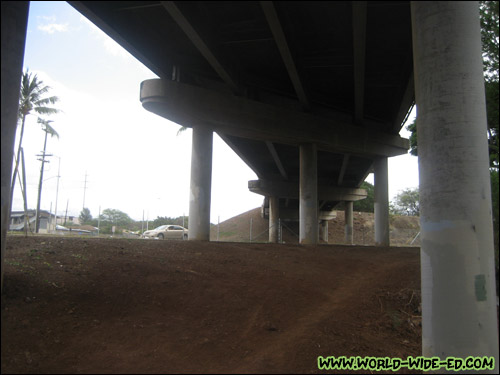 Under the Moanalua Freeway (HI-78)

Soon you’ll find yourself on the backside of Pearl Kai Shopping Center. Perhaps, if you were a member of 24 Hour Fitness back in the day when it was here, you might remember seeing some mysterious road with joggers prancing along it? Well, that was the Pearl Harbor Bike Path! Mystery solved! 😛 Here’s the only shot I have (from AndHere.com) of the backside of Pearl Kai. It’s the parking lot underneath the old 24 Hour Fitness. 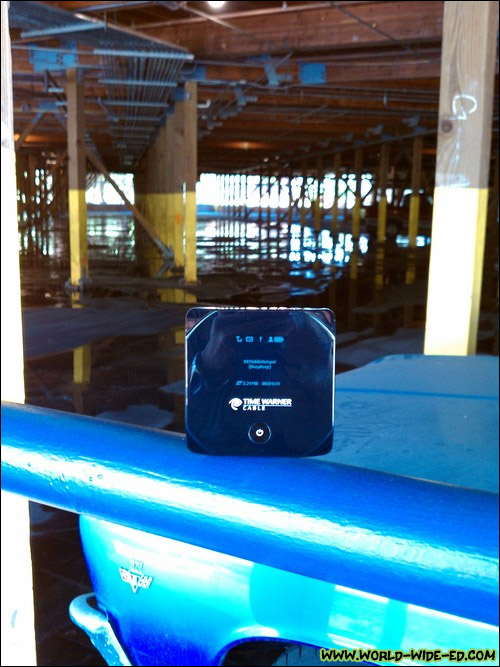 The back of Pearl Kai Shopping Center [Photo Courtesy: AndHere.com] 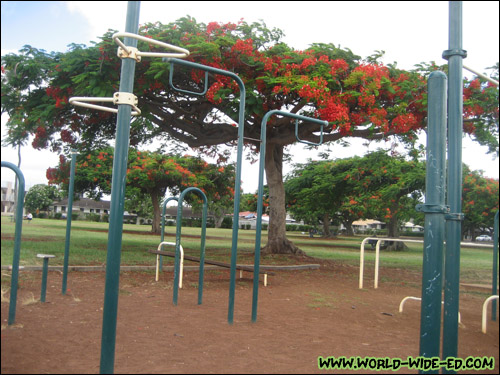 This is a good place to catch your breath and grab some water (and use the potty).

A few strip malls later, you’ll instantly recognize the back side of the Hawaiian Electric power plant… 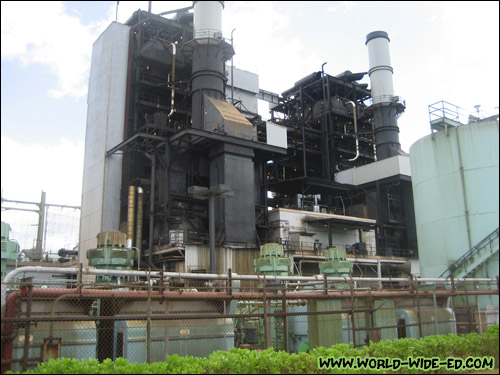 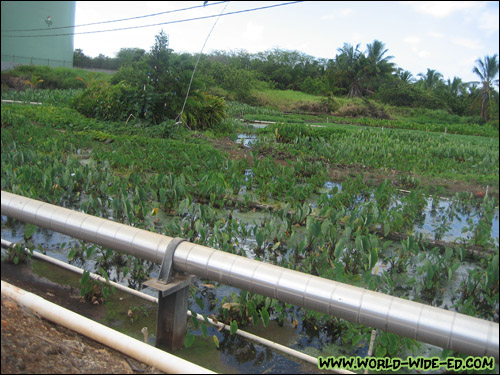 At this point, you’ll be riding parallel with the H-1 (westbound) for a little while with East Loch to your left. Passing Pearl City Peninsula on your left, things will open up at Middle Loch, where you’ll see some pretty cool ships docked out at sea. 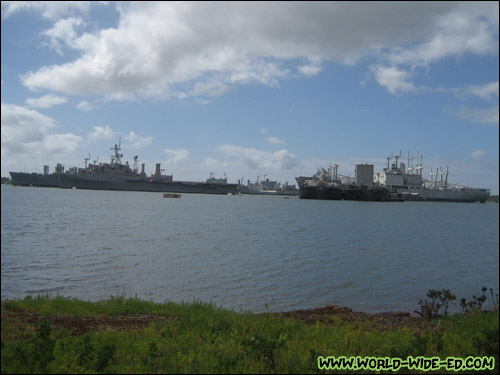 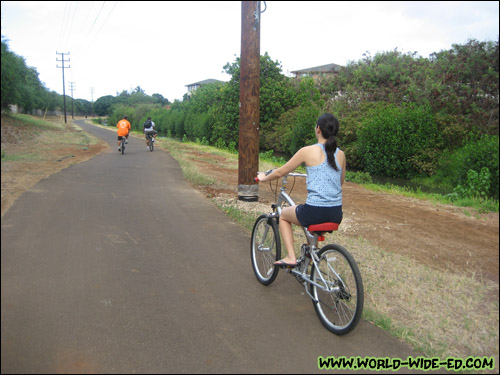 I noticed something really disturbing. 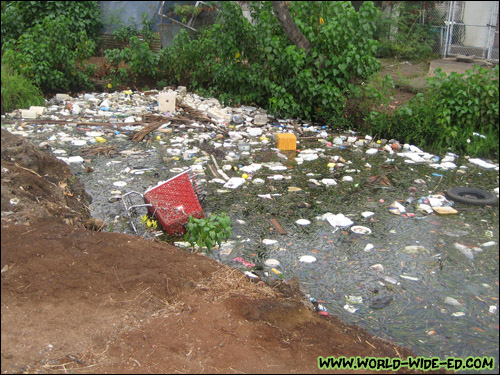 At the end of the little river/canal/stream that ran alongside of the bike path (Kapakahi Stream?), there was a build-up of trash and waste, including a shopping cart and even a spare tire! This is hereby a plea to the city to please take a close look into this! Mahaloz!

Finally, you’ll make it to Waipahu Home Depot Road where you’ll take a right to head towards Farrington Highway. Along the way, you’ll notice HUGE stacks of compacted recycled goods (at an Ewa Repair Shop? or Depot Metal Inc.?), a good a time as any for a photo opp! 🙂 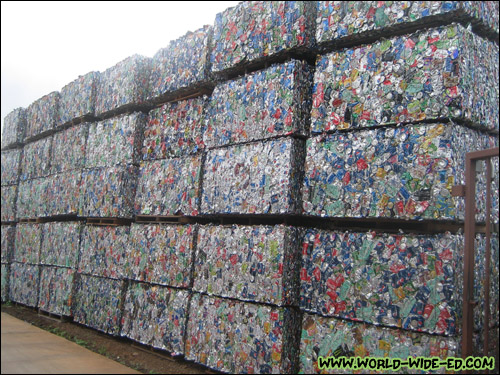 Continue to make your way towards Farrington Highway and you’ll start to get your bearings. You’ll pass by Servco Auto Leeward when you hit the highway. Strange coming from that direction yeah?

Since we were hungry, we decided to stop by at Tanioka’s to rest our bones… 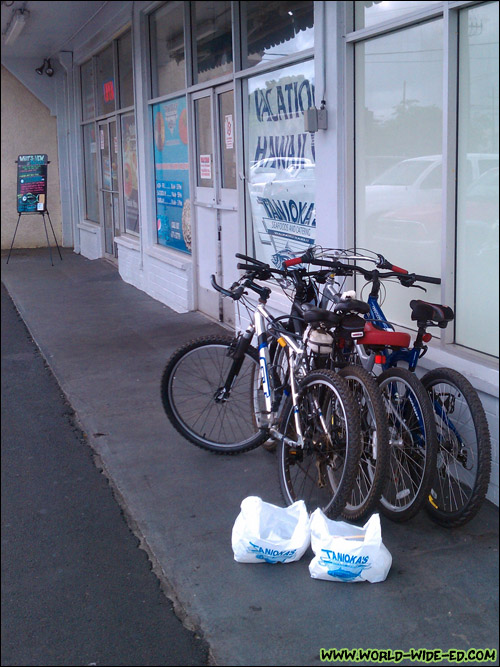 Our bikes outside of Tanioka’s

And pound some ono poke. 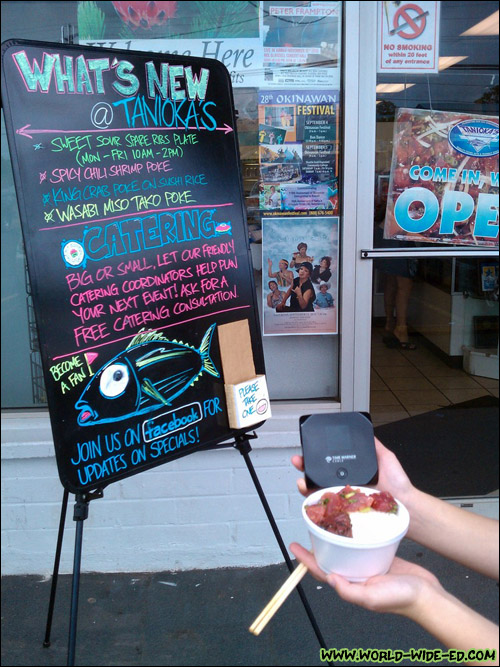 Poke and rice (with the IntelliGo) next to the Tanioka’s Menu  [Photo Courtesy: AndHere.com]

A big mahalos to bruddah Donovan for hooking us up with some ono grindz!

With our bellies full and bones well rested, it was time to make the return trip back to Aiea. Rather than listening to my annoying commentary, let’s press the mute button on me and enjoy the photos of the ride back in peace and quiet. 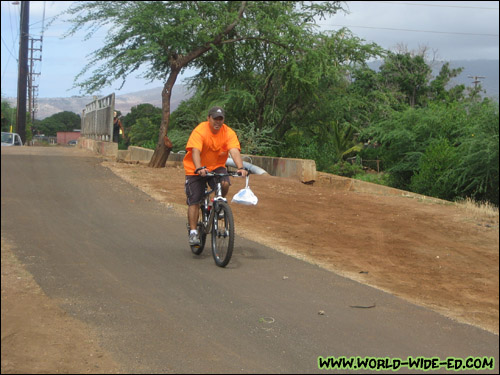 Jay with his leftovers 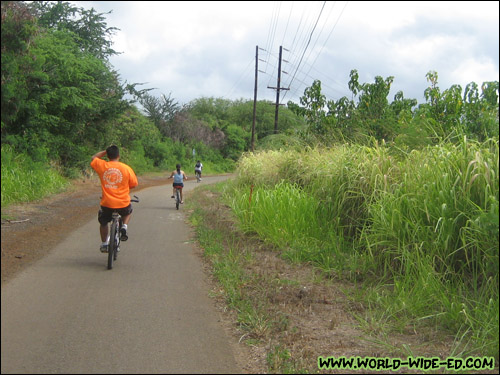 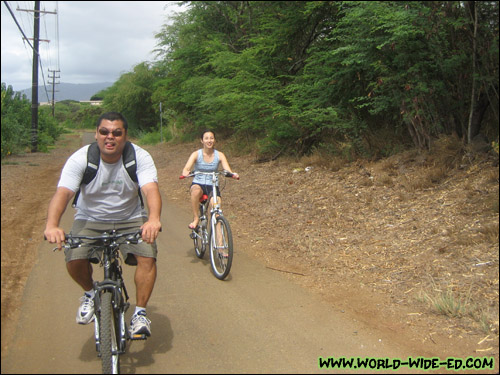 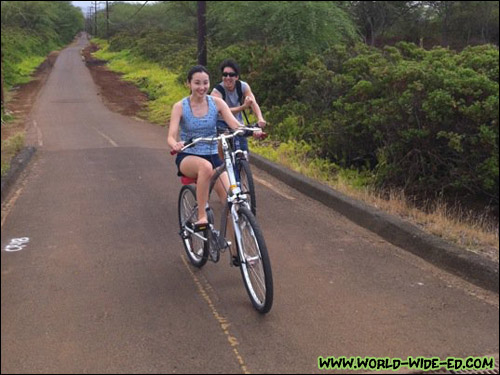 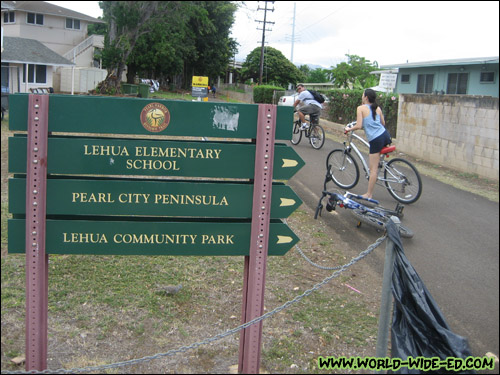 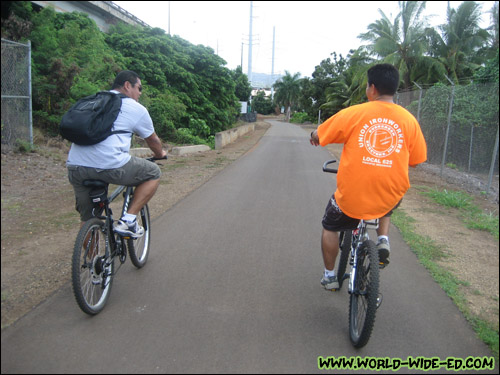 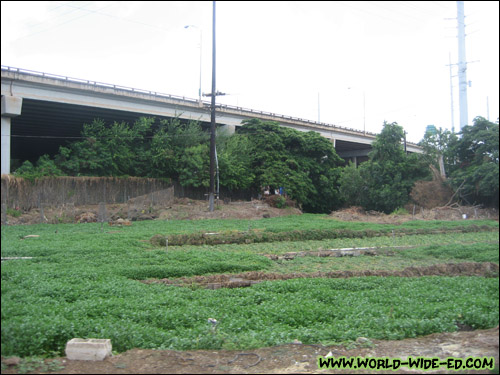 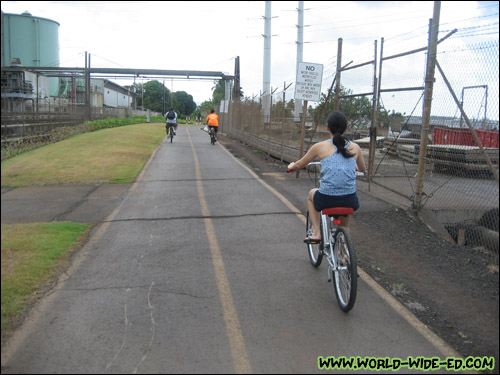 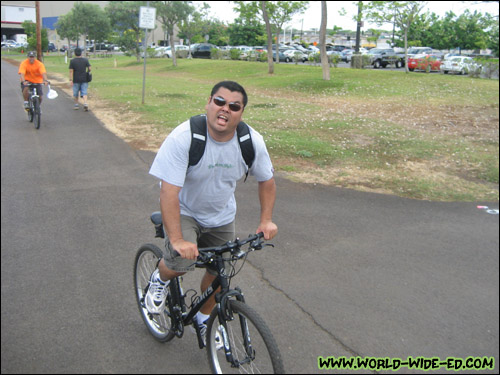 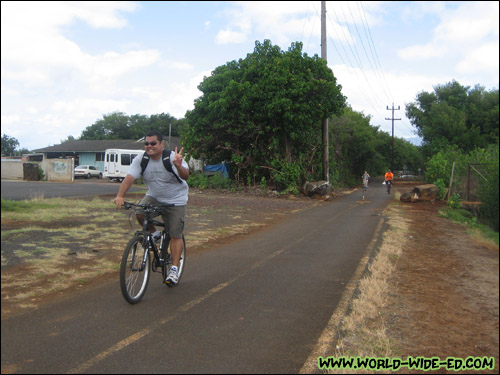 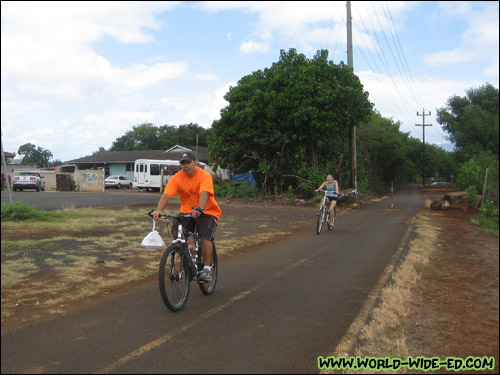 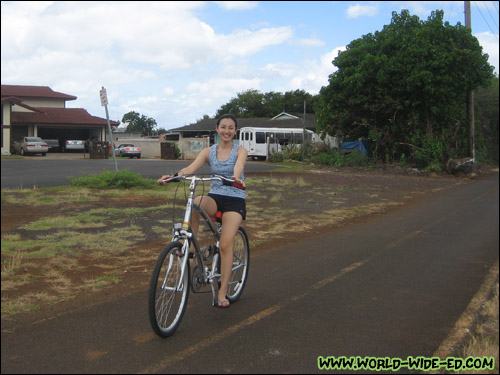 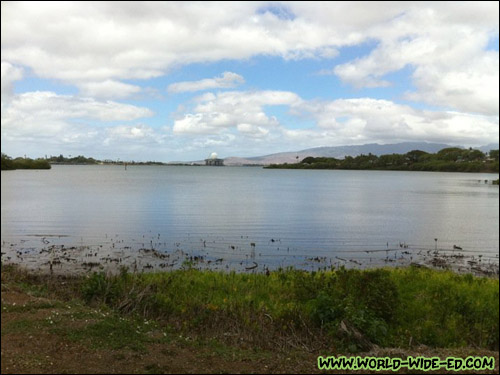 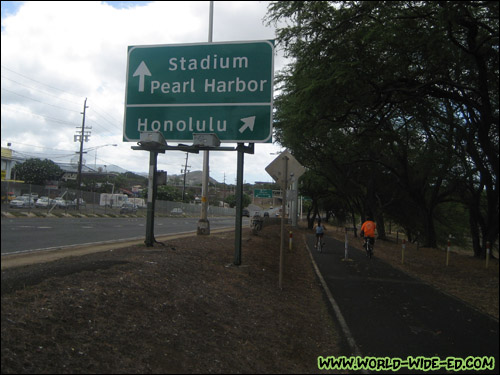 Right next to the freeway 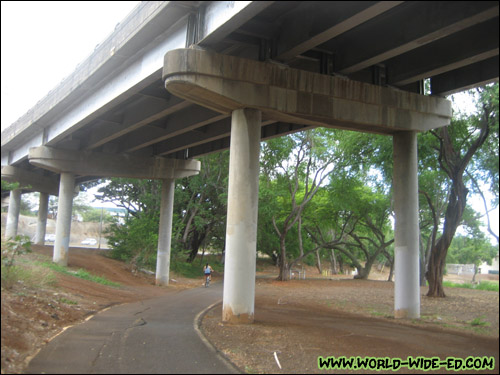 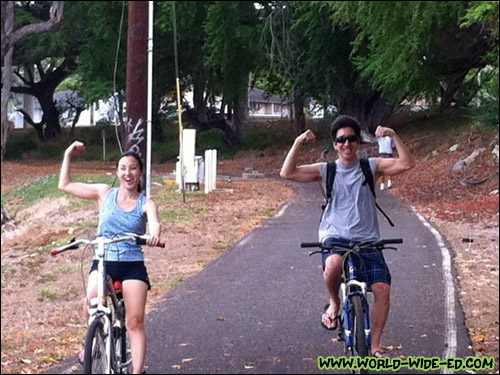 We made it! [Photo Courtesy: Todd Wakida]

I wanna say the entire trip probably only took like 2-3 hours, including the lunch break, but that’s just my guesstimate. An overall fun, and different adventure that you and your homeys can enjoy one (or every) weekend. Just remember to bring a friend if you’re not with me. 😉

One thought on “Hike, Bike, or the Like – Give the Pearl Harbor Bike Path a Whirl”