It all started with a tweet my friend Mari Taketa sent out on Wednesday, January 8th: 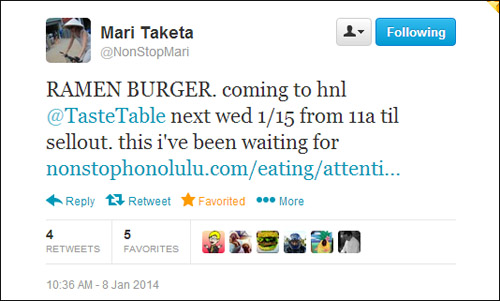 Wait WAAAAT!? *THE* Ramen Burger? You mean the original mashup from ramen prodigy Keizo Shimamoto that started it all? This I gotsta have! So I immediately check the ol’ calendar…

Of alllll days! 1/15 was the day I booked two back to back site surveys with our wireless vendors for #TWCWiFi! Gaaaaah! I’m booked the entire day! Oh well, I guess the Ramen Burger is gonna have to wait ’til the next time I visit New York. And so I never gave it a thought again. Just basically gave up on the idea.

Then, a few days later, as the news started hitting the mainstream folks, the wife asked me, “Did you hear about the Ramen Burger coming to town?”

“#$%^ don’t remind me.”… is what I thought in my mind, but “Yes dear, but I unfortunately can’t make it out that day due to prior work commitments.” is (kinda) what came out of my mouth. 😛

Then, I really started thinking. Hmm… Maybe I should give this thing a little more thought. The first site survey was at Pearlridge at 7am (Yep, Pearlridge will be getting TWCWiFi soon!). So if the survey ended early, there would be a slim chance that I could jet down to (the former) Taste Table, stand in line, get my burger and scarf it down before my next site survey scheduled for 2pm. But as feared, the site survey ran a bit long. There was however, still a small window to try and squeeze the ramen dream in.

I started calling/texting/tweeting anyone and everyone I could who may possibly be standing in line. Mari, who originally said she could get one for me (there was a 3 burger limit per person), now had 3 spoken for. As did my friends Shane and Toby. My texts to Shinogu and Alvin went unanswered. Maaaan. This is not looking good. To top things off, while driving down, Mari and Shane tell me that the line is already all the way to Ala Moana Blvd! Aw c’mon!

At this point, I had lost all hope. I started planning where my non Ramen Burger meal would be coming from before my next site survey. Ah, but let’s try to drive by and see what it looks like. Ack, as feared, it was pure insanity, so I went to my favorite “lunch in town” spot: Yajima-Ya.

As I sat there eating my Samurai don, I got a text back from Alvin. He was asking me where I was and if I was coming down. I told him I gave up cause there would be no way I could get it before my next appt. In so many words, he offered to use one of his 3 Ramen Burger spots on me if I came down to meet him. I couldn’t leave there fast enough!

I got to Taste a little after 12. After waiting for more than an hour, Alvin was now rounding the corner of Keawe and Auahi, heading towards the entrance of Taste. Although I didn’t earn it, I could practically taste the ramen bun on my tongue. 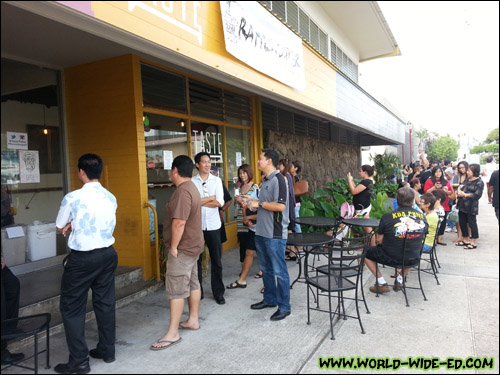 So as not to cause suspicion with the people behind Alvin, I acted as if I wasn’t there for the Ramen Burger, walking around, talking to other people in line. I even went to the back of Taste where they had it on display, likely there for people like me who wanted to get a picture of the famous burger. 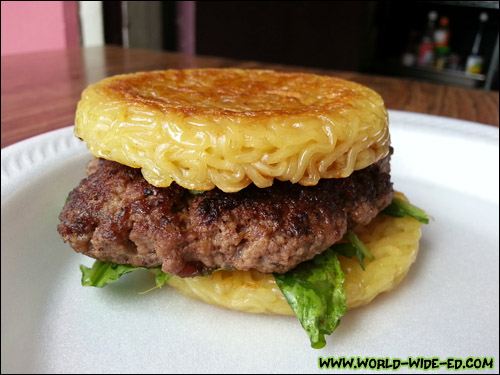 The money shot – The Original Ramen Burger by Keizo Shimamoto

Eventually, I slyly made my way back to Alvin and started small talk until I blended in. LOL! The people behind could probably sniff me (the cutter) out a mile away, but oh well.

As we stood in line, an employee kept coming out and getting a headcount of those waiting. They wanted to see how far the 700 burgers they were making that day would go. The situation for the folks in the back, especially for those behind the “cut off point” starting to look dire. One enterprising guy from the back proposed an offer to our friend Ritsuko who stood right in front of us in line. Since she was only getting one for herself, he offered to buy her burger (not cheap at $10) if he could buy the other two for himself. Win-Win. With the approval of those behind us, the guy got his wish. Smart.

As we slowly inched along, we overheard someone say that each burger, due to the small size of the grill in the back, was taking a minimum of 1 minute to make. With just 40 or so people ahead of us, it was no wonder it took us almost 2 hours to get from Keawe Street to the doorstep of Taste (40 people x 3 burgers = 120 minutes). I even had to reload my parking meter. When we got to about 10 feet from the door, my chariot was starting to turn into a pumpkin. My 2pm appointment was t-minus 10 minutes away. I waited as long as I could, but alas, could not stay any longer and had to leave. Alvin generously offered to deliver my burger to my site survey location, which he did (What a guy!) so I bought his burger as well. My wait was nothing compared to his after all! 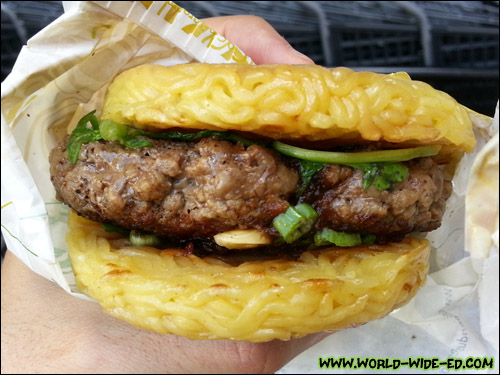 It was worth the wait. Although I had hoped that the “bun” would be grilled a little longer, the overall texture and flavor were on point. The noodles were, after all, provided by the one and only Hidehito Uki from Sun Noodle. And although slightly distracted, I was still able to notice that the grass fed local beef patty, with the green onions, baby arugula, and shoyu glaze did magic to my mouth as I ate and site surveyed. The shoyu glaze was a little reminiscent of the plum sauce that comes with the steamed bun and crispy duck skin at Chinese restaurants. Good call Keizo!

And so my brief love affair with the Ramen Burger ended. Or so I thought…

A few weeks later, I caught wind of some interesting news. It was announced that Eat the Street would play host to another round of Ramen Burger mania at the end of the month (though they did do another pop-up event at Taste on the 29th that not many knew about). After making the wife jealous (and frankly a bit displeased) with my Instagram photos from the first time, I felt it was my obligation, you know, as the greatest husband who ever lived, to brave those lines yet again, and pick one up for her.

Knowing how ridiculous the line was going to be, I headed to 555 South Street immediately following my last meeting of the day. One second there was no line, and before I could blink an eye, there were 8 people ahead of me. I rushed to hold my spot, and then started to document things. 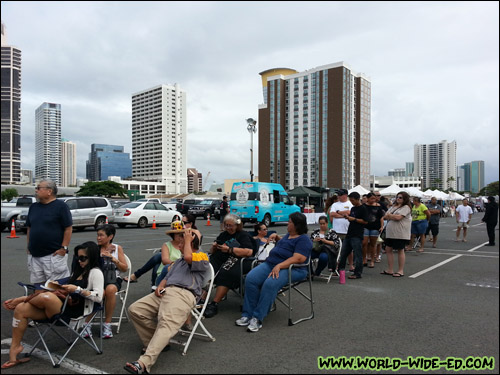 The start of the Ramen Burger line at Eat the Street 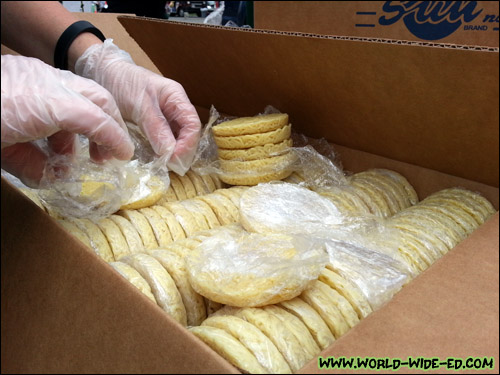 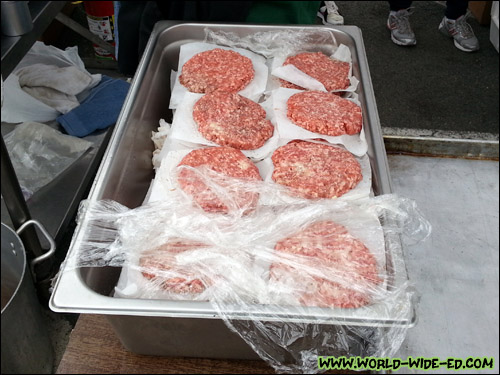 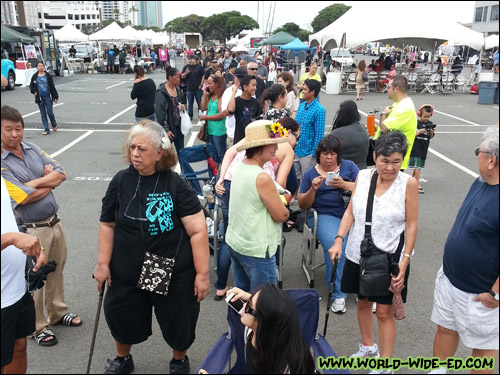 Woah, where’d that line come from!? 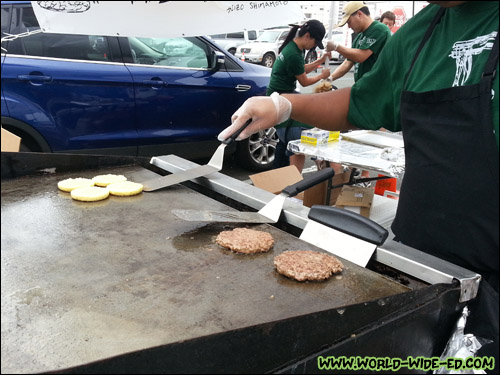 Annnnd the first two burgers and first 4 buns are on the grill! 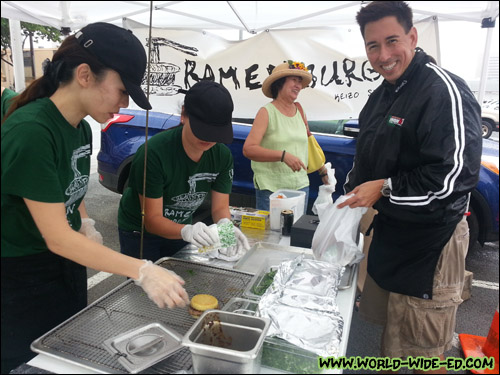 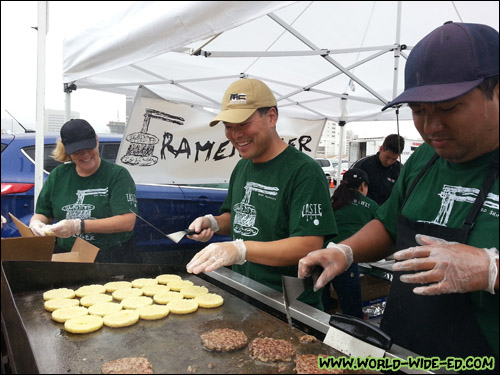 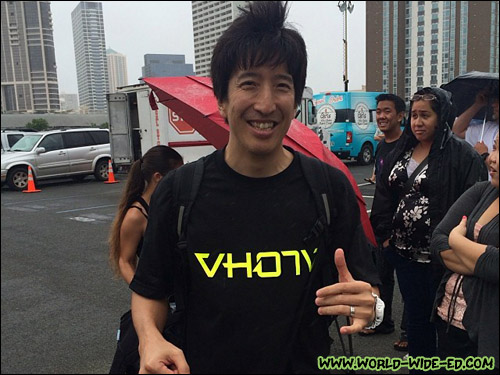 Almost at the front of the line! [Photo Credit: Rey Rubianes] 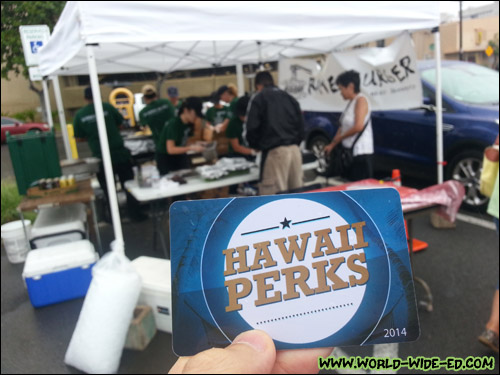 Bonus! I was able to use my Hawaii Perks card to get a discount on my Ramen Burgers!

Despite the rain, I was able to get in and out of there with my two burgers (there was a two burger limit this time) fairly quickly. Those two burgers were immediately taken to the in-laws’ house and shared with them and the wife. #Boom #InstantHero! 😉

And so as quickly as it came, it went. The prospects of having another taste of Shimamoto’s famous burger (recently named by Time as the 12th most Influential Burger of all time) would have to wait.

But not for long…

After huge debuts and followings for their pop-ups in New York, L.A., and more, Shimamoto and his Ramen Burgers will finally have a permanent home at BERG’N: Brooklyn Flea + Smorgasburg, the beer hall/food court set to open in Brooklyn New York in March.

Shimamoto, who famously quit his job to move to Tokyo in order to learn everything there is to know about ramen, will finally get the chance to fulfill his lifelong dream, one Ramen Burger at a time…