Jason “Mayhem” Miller and I have been “friends” on MySpace for years, but he probably had no idea. Sure, we’ve traded a few emails about him possibly becoming an AroundHawaii columnist one day, but that was way back in the day. You know, before he really became the Mayhem we all know and love today. 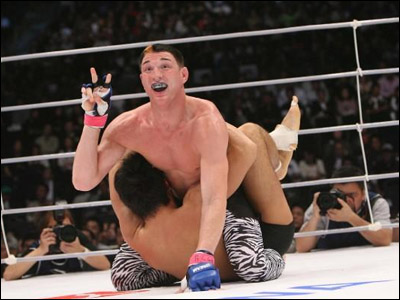 Who the heck is Mayhem you ask? The question really should be who Mayhem isn’t ’cause he’s just about everything you can think of in a real life action figure. He’s part wrecking machine (a sick professional Mixed Martial Arts fighter), part comedian (one of the funniest, off-da-wall guys you’ll ever meet), part Hollywood (gots more personality than a WWE wrestler), and part geek (loves him some video games). 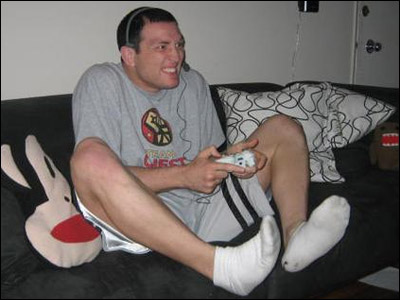 Mayhem’s humble beginnings started back in June of ’03 (well, at least it did for us Hawaii MMA fans) where he beat Jay Buck at the SuperBrawl 30 – Collision Course event. He followed that up with successive wins against Sean “Tornado” Taylor, and local favorites Egan Inoue and Ronald Jhun. By this point, us Hawaii peeps started taking notice. His ring entrances were magic and his post fight interviews even better. Hawaii had no choice but to fall in love with this charismatic S.O.B. (wassup Anuhea! 🙂 )

Then it was off for a brief stint in the UFC before returning for more fights in the islands under the Icon name. And then… it happened…

The world of MMA pretty much exploded into the mainstream phenomenon it is today, and, along with it, “our” beloved Mayhem. He’s now got numerous sponsors, is pretty much the face of HDNet Fights, writes regularly for FIGHT! Magazine, appears on a segment called Mayhem Mondays on Jason Ellis’ Sirius Satellite Radio show, is a favorite for all MMA related magazine and TV show interviews, and even has a worldwide cult following called the Mayhem Monkeys. 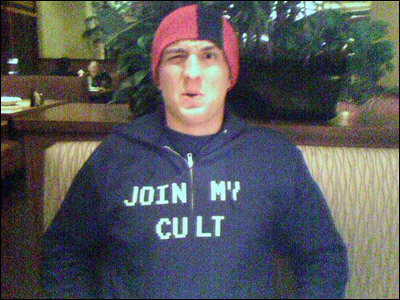 In preparation for this interview, I tried to “osmosisize” as much Mayhem info as I could. I knew it was going to be a wild ride as I’ve seen him wreak havoc (in a good way) on TV shows many times before. I was going in with the mindset that my questions would simply be the footnotes to the show that would be Mayhem. That’s pretty much how it all went down yo. Enjoy!

Edward Sugimoto) For those who aren’t in the know, please give a little background on who Jason “Mayhem” Miller is and what makes him tick.

Jason “Mayhem” Miller) Aw c’mon that’s the easiest question ever! What do you mean describe who I am? By the end of this interview, if you don’t know who I am… then you’re not reading. So if you read this… if people read this, well Bob’s your uncle.

Edward Sugimoto) (persists) OK, so for those non readers and non-MMA fans out there then, who the heck is Mayhem?

Jason “Mayhem” Miller) NO! I’m not going to answer that. Mayhem is Mayhem. If you don’t figure it out by the end of this interview, either you didn’t give a good enough interview, or the person did not read well. You’re gonna figure it out over the course of this magical journey.

Edward Sugimoto) Who are the Mayhem Monkeys?

Jason “Mayhem” Miller) Mayhem Monkeys are a cult. Like any other cult we do whatever it takes to further our agenda and, on a daily basis, we’re furthering our agenda.

Edward Sugimoto) And it got started on the Internet?

Jason “Mayhem” Miller) No, they got started in my backyard when I was 16.

Edward Sugimoto) Is it true that you used to be a computer geek growing up?

Jason “Mayhem” Miller) I am still a computer geek to the fullest. I just switched over to a Mac and I think that anybody who doesn’t switch over to Mac is pretty much a retard and should not be allowed to breed. And I say that with every drop of my soul involved because Mac is so much easier and it doesn’t crash half as much and when it does crash it comes back to life normally. And they have service that is light years above and beyond that of the PC… the call centers in India where they don’t even speak English well and they’re just faking like they do and they say their name is “Ted” but they’re name isn’t “Ted.” Their name is some varied Indian name but they can’t say that so they gotta pretend that and say they’re in Indiana but they’re not! They’re in Mumbai.

Edward Sugimoto) So I take it you’re sponsored by Mac?

Jason “Mayhem” Miller) No! I wish! If Mac would come though, I would gladly… uh… You know what? I would even do it for just some new computers. Some Macbooks and new uh… I want one of those Airs, but I can’t justify spending that much money when I can’t even put a CD in that thing.

Edward Sugimoto) How did you go from being a computer geek to punching people in the face?

Jason “Mayhem” Miller) I’m still a computer geek. I never left. I just punch people in the face. It’s the same thing dude. Fighting is the same as anything else. You figure out a system to win, and you try to win, you know what I mean. Life is just one big video game. If you figure it out, you try to find the best skills to do whatever you need to do well then Bob is your uncle you figure it out. 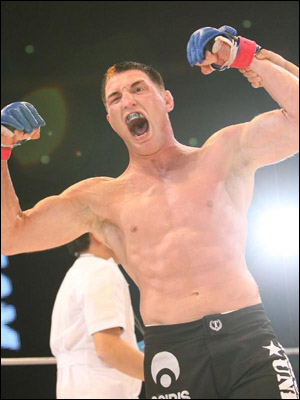 Edward Sugimoto) What’s a typical day in the life of Mayhem like?

Edward Sugimoto) You’ve always given props to your Hawaii fans. What is it about them that you vibe on?

Jason “Mayhem” Miller) What do you mean? Hawaii is like my home. Hawaii is like my hometown, you know, so what the hell, like I can’t really turn my back on the whole deal, just because I’m living on the mainland trying to make a bunch of money being a TV star, beating people up in the mainland and in Japan. You can’t just turn your back on your family you know. Believe me I tried because my family is out of their goddamn minds.

Edward Sugimoto) OK, we won’t put that in there.

Jason “Mayhem” Miller) NO! Put that part in. I don’t care. My family knows they’re all out of their damn minds. My dad’s crazy, my mom’s crazy, my sister’s crazy. And that’s all I got in this world. That and Hawaii.

Edward Sugimoto) How do you come up with it? Where does it come from? Why do you do it?

Jason “Mayhem” Miller) What I do is an art, an art form. That’s just part of the art, the expression, so, I do it. 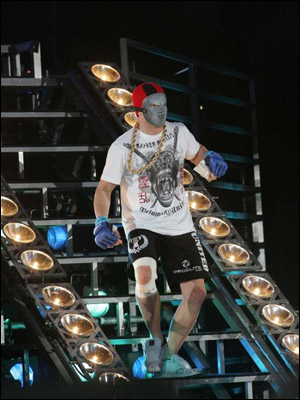 Edward Sugimoto) It’s not to intimidate the opponent?

Jason “Mayhem” Miller) Why? It’s for me, it’s for the fun. I only get to be magic for one night in the fight world so I’m gonna make the most of it you know. Everyone’s paying attention so, you know, I try to express myself in other ways than punching the guy, kicking the guy, and choking the guy. 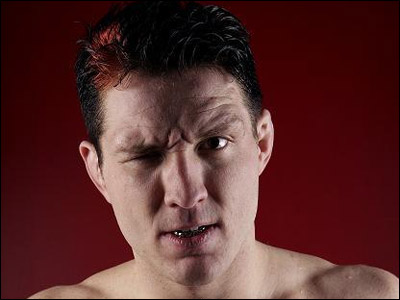 Edward Sugimoto) Be honest, it helps you with the ladies doesn’t it?

Jason “Mayhem” Miller) Yeah, if they know what it is. If not, they think I’m retarded. You know, whatever. I was just too lazy to wear a headgear honestly. And then I got the ear and then the doctor said to wear the headgear and I just never wore it, so you know, it’s nothing special. I wish that I didn’t make my mama cry. She stopped drinking for 9 months so that I wouldn’t be retarded, and I still ended up retarded.

Edward Sugimoto) What was up with that sudden retirement? Were you seriously just done with it all?

Jason “Mayhem” Miller) Yeah, I never was retired, I said retarded. Yeah and then everybody thought I said retired so I just rolled with it and said yeah, I’m retired and just agreed with everyone. So, I dunno, I just didn’t have any fights scheduled so I said whatever you know.

Edward Sugimoto) You’re next fight is against tough guy Kala Kolohe Hose on April 18th. Are you ready to go? 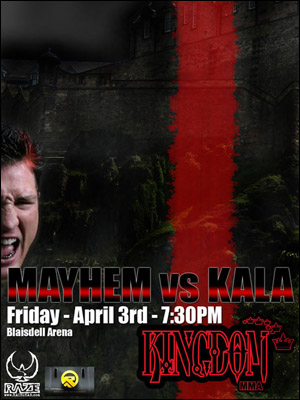 Edward Sugimoto) You also have a new reality show coming out on MTV this month called “Bully Beat Down.” Let’s talk about that.

Jason “Mayhem” Miller) What do you want to talk about?

Edward Sugimoto) You know, what it’s all about, what’s the premise, that kinda thing.

Jason “Mayhem” Miller) The premise is, you know there’s bullies all over the globe. I step to the bully and offer ’em 10 Gs to step in the cage against one of my fighters. Now, more often than not, they agree to do it AND they get their ass kicked… and we all have a good laugh.

Edward Sugimoto) I expect global notoriety and worldwide domination after that. You?

Edward Sugimoto) Anything else you ‘d like to say to your Monkeys out there?

Jason “Mayhem” Miller) They already know. Yeah, they’re in the know. I don’t need your web site to tell ’em.

Probably one of my most adventurous interviews yet. I knew going in that I would be laughing my butt off, but I didn’t think it would be after every single question. Though he’s pretty intense and intimidating at first (perhaps it was because I met him right before some serious training?), he’s got a likable way about him that makes you feel comfortable as well. It was almost as if it were just two friends shooting the breeze one evening. Well, MySpace friends at least… 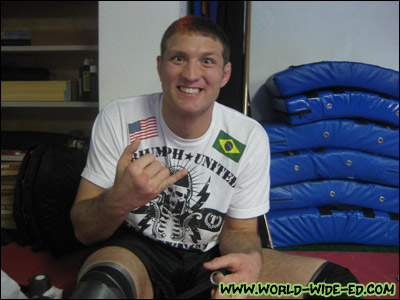 (Would like to send a special shout out to Todd Tanaka of Team HK for setting things up and letting us use your dojo for the interview. Mahaloz also to the students there for letting me sit in and watch you guys train. Lastly, mad props to Jason “Mayhem” Miller for the time. Good luck in your upcoming fight and TV show).

One thought on “Monkeying Around with Jason “Mayhem” Miller”