Todd is your typical local boy. Born and raised on big plate lunches, beaches and BBQs, this pseudo-expat will get all emotional on you if he stays away from these for too long. So when he made plans to return to Oahu for a few days from his current/temporary abode on the Big Island (with previous stints in Las Vegas, Maryland and Virginia), I made it a point to take the day off and tag along with this tourist to wherever he wanted to go. Turns out HE showed ME a thing or two about Oahu and its many hidden treasures…

The day started with a scheduled 7:30am arrival time from Kona International Airport at Keahole to Honolulu. As we all know, that means 7:40am by the time they get out of the plane and are ready to be picked up (7:50am if they need to go to baggage claim). So guess who calls me at 7:20am with an excitable voice traceable only by the high-pitched shriekiness? Yep, Tourist Todd. I was already on the way, but still rubbing the sleepiness from my eyes. He felt so guilty for his early morning arrival that breakfast would be on him at our first stop at Toshi’s Delicatessen in Kalihi. 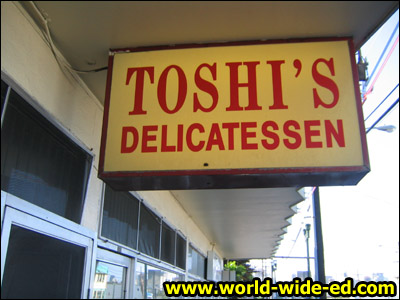 This tiny, hole-in-the-wall okazu-ya sits inconspicuously on the mauka side of North King Street, just a few blocks from downtown Honolulu. (! – There is a small strip of parking right up front, but be careful if you’re coming from the Wes’side… the turn is dangerous and possibly illegal).

At 7:49AM on a workday Friday, there was already a line of hungry locals forming. 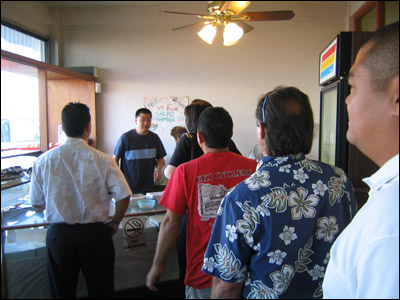 After tasting their Japanese-style breakfast/lunch lineup, it’s not hard to understand why. 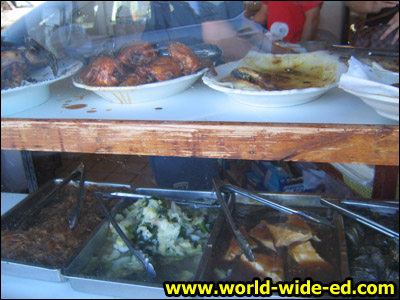 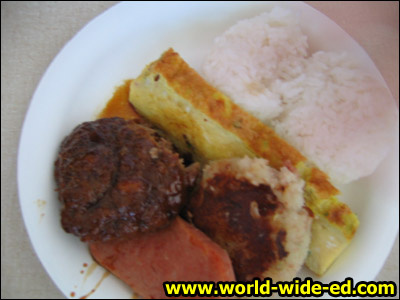 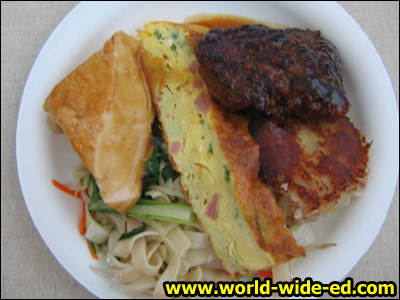 With food in our bellies, we headed just up the road to Chi-town, aka Chinatown. We were having a local-style barbeque that evening and wanted to pick up some goodies ahead of time. We ended up getting just three items: charsiu, roast pork and Okinawan sweet potatoes, but the photos I captured throughout provide for some interesting sights if I do say so myself. 🙂 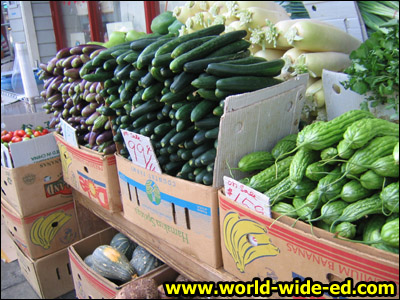 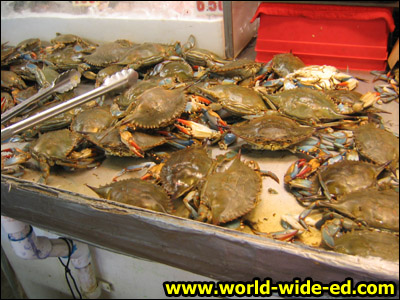 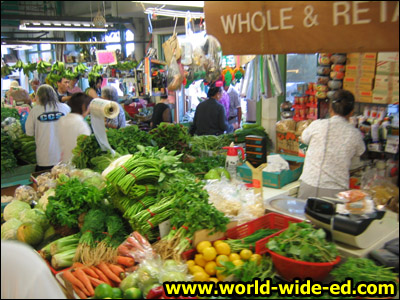 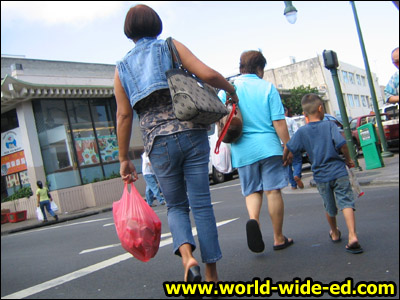 Crossing the street in Chinatown 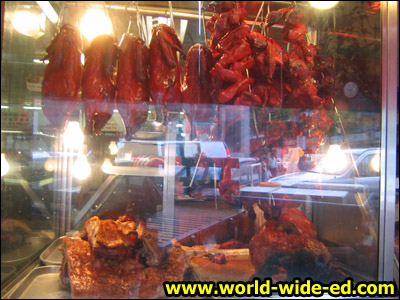 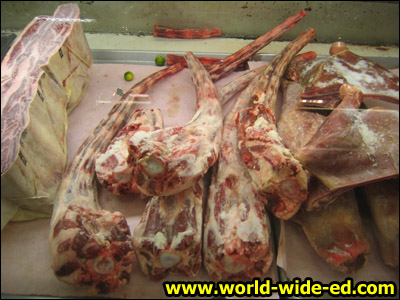 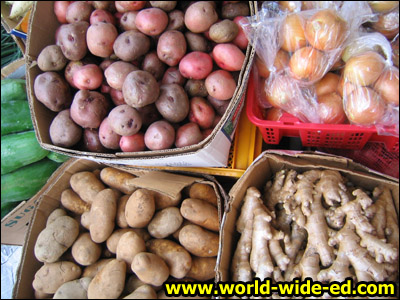 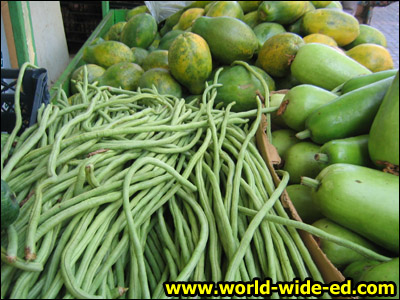 Fruits and veggies in Chinatown 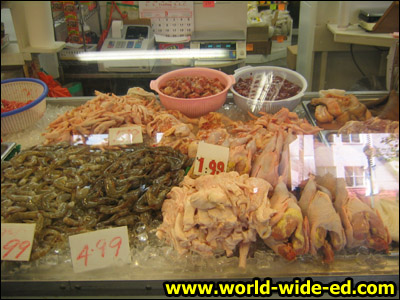 Seafood and poultry selection in Chinatown 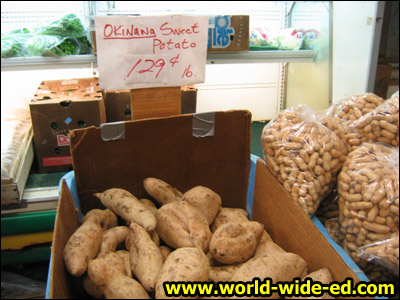 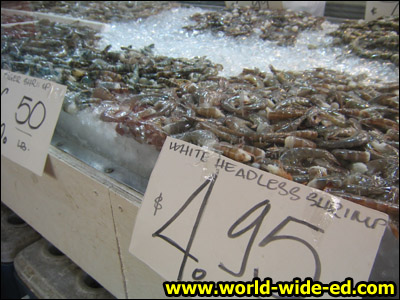 Shrimp selection at the Maunakea Marketplace in Chinatown 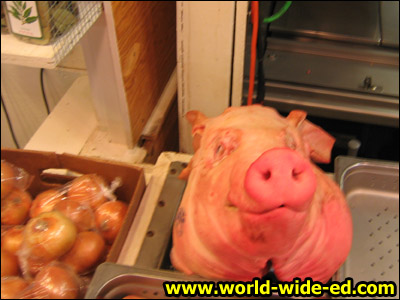 Poor piggy who went to the market

Following Chi-town, we went to another “C-town” (Costco town) to pick up the rest of our eats for the BBQ: Tri-tips, shrimp, bacon & scallops, and other miscellaneous goods. We then headed for the crib to prep and drop off the food for that night. Our other friend Kelvin picked us up from here and we headed to the beach.

Didn’t take too many beach shots (or at least ones they would let me show you), so below is just one taken after our day in the sun, walking back to the car. Side note: When I told Todd I was writing a “day in the life” piece of his time here and asked him what he wanted to include in it, rather than mentioning anything about food, Hawaii or otherwise, he wanted to mention that he’s single and available. Kelvin is as well FYI, so for all y’all single ladies out there, feast your eyes on this! *grin* 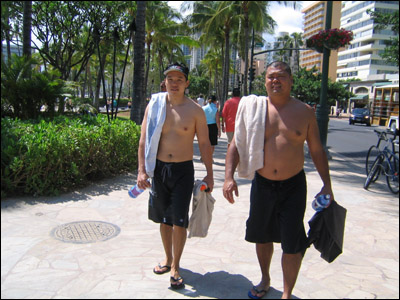 Nothing tastes better than a plate lunch after the beach, so the three of us stooges headed to local favorite Rainbow Drive-In in Kapahulu. 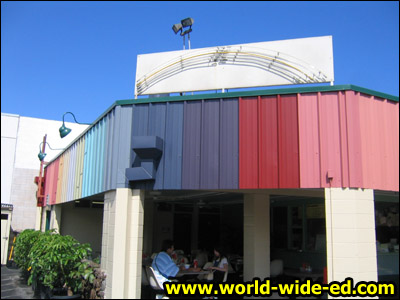 Kelvin and Todd – both monster eaters – ordered the Mixed Plate, which consists of teri steak, grilled mahi, and chicken. Todd was so much in heaven that he wouldn’t even move his hand to let me take a picture! 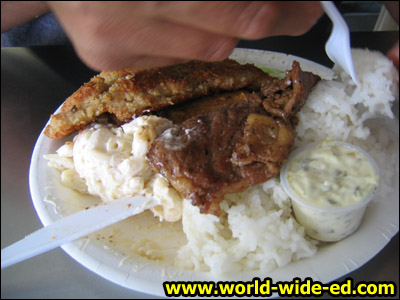 As for me, I took the practical approach and got just a burger and fries to save my appetite for the eats to come that night. 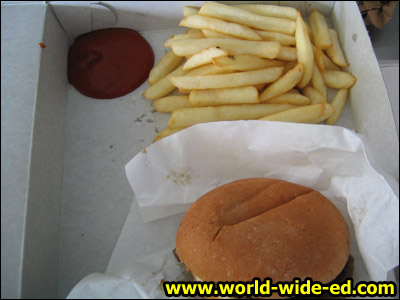 Kelvin made a joke that Rainbows was so fast that as soon as you placed your order and walked over to the next window, your food would be ready! He wasn’t too far from the truth! For future reference, Rainbows is fast kine!

With more than 12 hours past since that girly voice greeted me on the phone this morning, it was time for the barbeque! Let me put on my bbq hat and attempt to recipe this buggah out:

First up on the grill was the beef tri-tips.

Season the beef with garlic salt, seasoned salt and pepper just before cooking (will dry out meat if done too far in advance). Pour enough olive oil over each piece to moisten. Cook over grill, rotating regularly, to desired wellness. 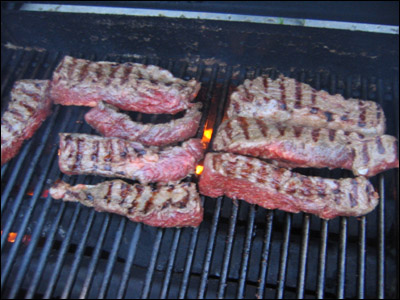 Beef Tri-tip on the grill

Next was the Italian-style shrimp:

Defrost the shrimp and lightly salt and pepper them (shrimp is naturally salty and will also get ample flavoring from the dressing). Throw shrimp in a Ziploc bag, empty dressing into the bag and zip up. Do your best impression of “Shake Yo’ Money Maker” or “The Twist” (depending on what generation you’re from) and shake the bag until your shrimp is well coated. Place in fridge and let sit/marinate for at least a couple of hours.

When they’re ready, throw ’em on the grill and cook to taste, rotating regularly. (Note: Shrimps cook very fast so keep them off of the hot part of the grill and keep an eye on them or they will burn/char.). 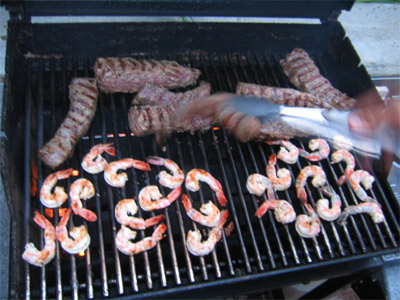 Defrost frozen scallops and remove hard connective tissue (optional). Wrap bacon around scallop and secure in place with skewer. No flavoring necessary as the oil and saltiness from the bacon will be sufficient. Grill, rotating regularly, to taste and serve. 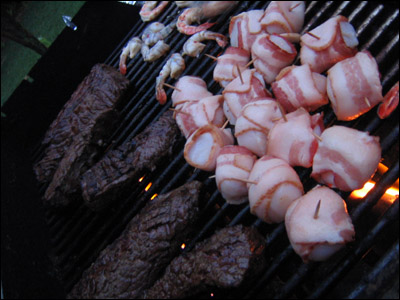 Bacon-Wrapped Scallops round out the bunch

Big plate lunches, beaches and BBQs… All in a day’s work. But let’s not forgot to mention one of the most important Bs that makes living in the islands so unique: bonding with your buddies. You can’t put a price tag on that.
Good food, with great friends… Lucky we live Hawaii.