Chad Owens is no stranger to competition. He came into this world fighting… Fighting for his life.

Weighing just 3 pounds, Owens (aka “Mighty Mouse”) was born a month and a half premature. It was the determination of his mother to never give up on him that became the driving force behind who he is today and how he approaches life’s daily challenges.

It is that same drive and determination – genetically ingrained within his DNA – that fueled Owens to find success in his life’s calling: sports. He lettered in 4 sports (football, basketball, baseball & track) at his Alma Mater: Roosevelt High, thrived under June Jones’ Run & Shoot offense during his time with the University of Hawaii Warrior football team, and has recently been named the Canadian Football League’s Most Outstanding Player while breaking records and becoming a world champion along the way (his Toronto Argonauts defeated the Calgary Stampeders 35-22 in the CFL championship game to take home the home the 100th Grey Cup).

Not bad for a guy who has always been told he’d never make it. 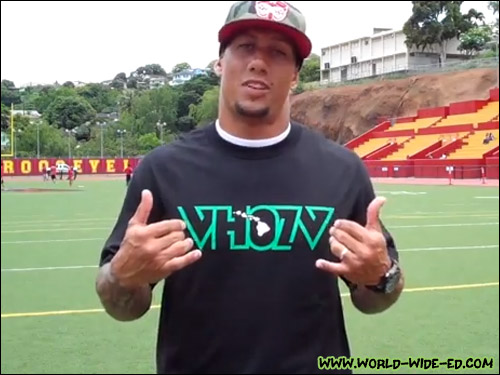 I recently had the wonderful opportunity to chat with this local boy about his family, career, MMA debut, and more…

[Edward Sugimoto]: First off, congratulations on a HUUUUGE 2012 season! Let me see if I can list your accomplishments:

[Edward Sugimoto]: Safe to say, you had a decent year? 😛

[Chad Owens]: Yeah. It was a successful one, both individually and of course as a team we won the championship. But no, I had a lot of fun this year, and looking forward to doing it all over again this upcoming season.

[Edward Sugimoto]: What was your life like in the early days and how did you first get into athletics?

[Chad Owens]: Whoo, in the early days. How far back would that be? I’ve been playing sports my whole life, as far back as I can remember. I started off playing soccer, but I was always in sports. I think I needed sports. I was always a little active, scrappy, feisty little kid. I guess a rascal. That’s what my mom them would say, I was a little rascal. But sports kinda gave me a way to utilize that energy, and I’m thankful that my mom them put me in sports and allowed me to become who I am today.

[Edward Sugimoto]: During your time here at Roosevelt, you lettered and succeeded in three sports: Football, Basketball, & Track.

[Chad Owens]: And baseball, a couple years. My freshman year and my senior year.

[Edward Sugimoto]: Which did you enjoy the most and why?

[Chad Owens]: Obviously I love football, but basketball season was always you know, to me it was a lot of fun. I love playing basketball. But I just enjoy sports. It didn’t matter what I was doing, I just enjoyed the competition, and I enjoyed coming out here and competing and trying to be the best.

[Edward Sugimoto]: You also played for (what was known as the University of Hawaii) “Warriors” at the time… At what point did you know that the next level was a possibility?

[Chad Owens]: As far as being a professional? I think it probably struck me after my senior year. During my senior season because up until that point, I just wanted to be the best college player that I could be. Being at the Division I level was already a dream come true for me, so I just wanted to continue to be the best that I could be there and enjoy those years and that’s what I did. But it wasn’t until my senior year started coming to an end and I knew I was having a pretty good season and I started to think like man maybe this NFL thing or “professional” thing is really there for me you know? And again, I’m thankful that I had that opportunity.

[Edward Sugimoto]: You mentioned the NFL. You had a brief stint there but it seems you’ve really found your home in Canada in the CFL. Describe what your life is like there as a football star and what your family likes to do for fun.

[Chad Owens]: Life in Canada has been great. The CFL has given me the opportunity to be me and go out there and play ball and play the way I know I can play. The family enjoys it, we’ve made a lot of great friends up there and Toronto is really a nice city. It’s a great area, it’s got great people, and it is our home away from home. So it has definitely been an interesting transition you know, my career, but I do believe that I’m at the place where I belong now and I will 99% finish my career there, I’m pretty sure of that. I’m just taking it for what it is. I’m very fortunate and thankful that I was blessed with these opportunities and my family and I are just enjoying the moment.

[Edward Sugimoto]: You mentioned your family. You have a beautiful wife Rena and three beautiful kids (Chad Jr, Areana, & Sierra-Lynn). How are they adjusting to life outside of Hawaii?

[Chad Owens]: You know they’ve grown up around it. They’ve been to Jacksonville, they’ve been to Colorado, they’ve been to Montreal, you know, so they’ve traveled with me throughout my whole career and I think it’s the norm for them now, so they’re not afraid of change, they’re not afraid to travel so for them, they’re getting experiences that not much get to have and I think it’s gonna benefit them because when they get older, like I said, they’re not gonna be afraid of change. They’re not going to be afraid to go out and venture. Go to the mainland and maybe look for work, I don’t know. Go to school, go away from here because they’re used to it. So to me that’s a big positive for them.

[Edward Sugimoto]: So this past April, you made your professional MMA debut against Junyah Tevaga. How was that experience for you and is this something you’d like to pursue again one day?

[Chad Owens]: The experience was awesome. It was definitely something that I’ve longed to do and I wondered how I’d be and if I trained and put my heart and soul into it how I’d do and I did just that. I trained hard and I was all in, 100% into MMA and I was fortunate enough to get that fight, and it was fun. But it was definitely a different type of adrenaline rush and I enjoyed it, so yes, I would definitely love to do it again, but for right now, my focus is on football and that’s where I’m at with that right now. *smiles*

[Edward Sugimoto]: Speaking of the fight though, ho, you were a beast man when you came out it was pretty nuts.

[Chad Owens]: It’s a really fast fight. Two three minute rounds. The normal I think is three fives. Five minutes is a long time, you can’t expect to go in there and just bang for five minutes straight, so there’s always those pacing moments, the feel out moments right? But three minutes it goes by so fast and I trained at such a high pace that that’s what we wanted to push, we wanted to push the pace and it was fun.

[Edward Sugimoto]: It showed. So you’re on Instagram (@chadowens2) and your feed shows a lot of workout related photos. How important is that to you as a part of your daily life.

[Chad Owens]: It’s very important because, yeah, granted I am a professional athlete so training… I say this kinda cliche-ish, training comes easy. Not all pros enjoy training, but I enjoy training. It’s a lifestyle that my family and I enjoy. It’s something that I hope… My kids see it. You know it’s an example for them so we just want to continue to share that with everyone. This is not just a once in a while thing. We live it. We live training, we love it. I tell my wife all the time, you only get to stay young for so long so you might as well get the most out of your body and work out, train and look the best that you can look while you got it. And it’s a healthy thing. Training and working out is healthy. And we’re all cognizant about what we eat, and again, it’s a great example for our children and the people of Hawaii and all our followers. We just want to continue to be an example that way as well.

[Edward Sugimoto]: You’re also on Twitter (@chadowens2) and other social media venues. Does that help you keep in touch with your fans pretty good?

[Chad Owens]: Yeah definitely. Twitter is a crazy world. When I first got on, I was on it avidly and with the Instagram, you could get caught up in it and get lost in it for hours, and I’d rather spend my time more wisely. There are times when I tweet stuff and Instagram and do those things and to me there are times and places for that, but I have to make sure I get done what I have to get done first before I start getting into the social media, but it is a great way for me to stay in contact with my fans and to keep them up to date with what I’m doing here in Hawaii and vice versa, when I go to Toronto, you know all the fans, friends, family that’s here in Hawaii gets to see what’s going on when we’re up in Toronto so it’s just an awesome tool

[Edward Sugimoto]: And the Toronto fans can keep in touch with you too.

[Edward Sugimoto]: So do you have any words for your fans out there?

[Chad Owens]: I just want to say Mahalo and thank you for all the support throughout these years. It’s been an amazing ride. It’s you guys that keep me going. It’s the fans here in Hawaii that come out and tell me, “Hey I remember that BYU game”… It’s things like that that I really appreciate so thank you guys so much and you know… Aloha!

During my entire conversation with him, it was readily apparent that Owens has an inner fire that is unmatched and it became crystal clear as to why he has been so successful in a career where many have not.

Although he’s accomplished everything a professional athlete can possibly accomplish in their given sport, I have a feeling, he’s got something else up his tattooed sleeve for this season. Be sure to watch and support our local boy as he taps into that inner determination – passed on to him by his mom – as inspiration to continue that daily fight… 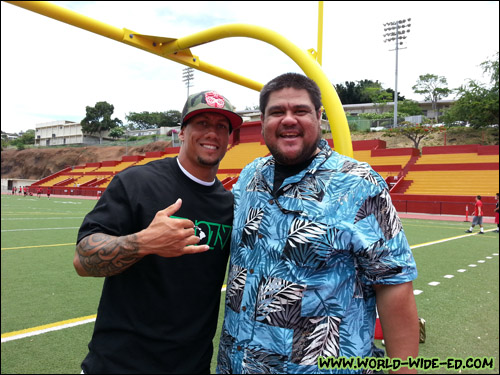 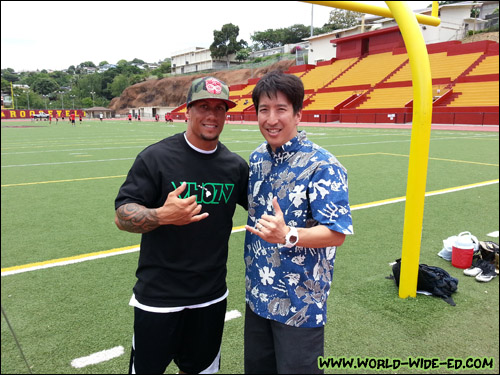 Special Mahalos to Arthur Betts IV for the Production assistance and Chris Avery for the editing assistance. And of course to Chad Owens himself for his time and Aloha!

One thought on “Chad Owens – A Born Fighter”