I gotta admit… One of the perks of working on these “best of” pieces is the eating. I’m lucky enough to grind some of the most onolicious foods Hawaii’s got to offer and live to write about it. This month, I’m covering one of my all-time favorite snack/food/pupu/whatever-you-wanna-call-it: Poke! Aurite!

According to Wikipedia, poke (pronounced poh-kay) is “a raw fish salad served as an appetizer or main course in Hawaiian cuisine. Poke is Hawaiian for ‘section’ or ‘to slice or cut’.”

The expert in local kine poke is local kine chef Sam Choy. In his new book, simply named “Poke” he shares some history: “In the old days, the whole slice would be eaten, skin, bones, and all. Inedible portions were picked or spat out. When the raw fish was ‘prepared,’ it meant the fish was mashed (lomi), or other ingredients were added to it, mostly salt and savories like ‘opihi, lobster, sea urchin roe, kukui nut relish, and different kinds of limu (seaweed) – manauea, lipe`epe`e, kohu, lipoa, etc.” 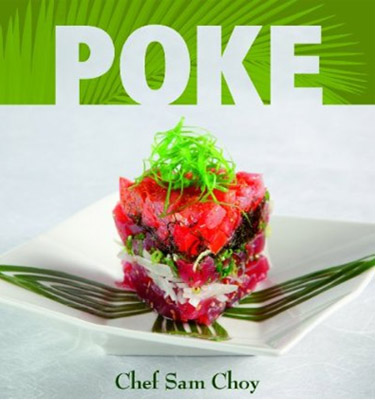 Buy This Book from Amazon.com

Growing up as a second generation Japanese-American, raw fish and seafood has always been a part of my life, so poke was a natural and, frankly, easy transition for my taste buds. In high school, I worked in the seafood department at my neighborhood market and became somewhat known for my poke concoctions. I remember customers asking if I made the poke that day, and, if I said, “No, I just came in,” they would frown and walk away. I took that as a great compliment.

My goal with this article is simple: Give props to the local establishments, big and small, who are doing poke right, right here in Hawaii. I’m proud to be from Hawaii, and feel that it’s almost my duty as a local boy to spread the word about those who are doing their part to perpetuate the rich culture that is poke.

Yama’s Fish Market
Yama’s is a small fish market I used to frequent during my old school UH days, back when they were near Poha Lane. Now, they’re right down the road on Young Street and is almost always a pumpin’! 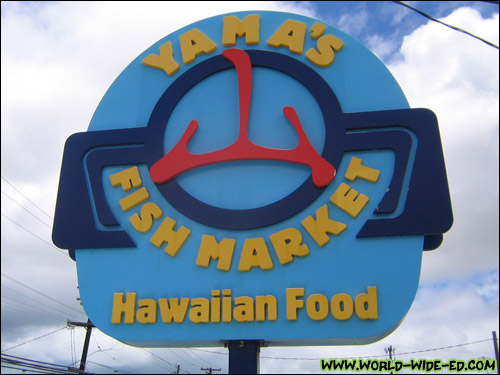 Though their Hawaiian plate lunches are pretty mean, my main focus whenever I go to Yama’s is their Ahi Masago Poke. It’s to die for! Trust. 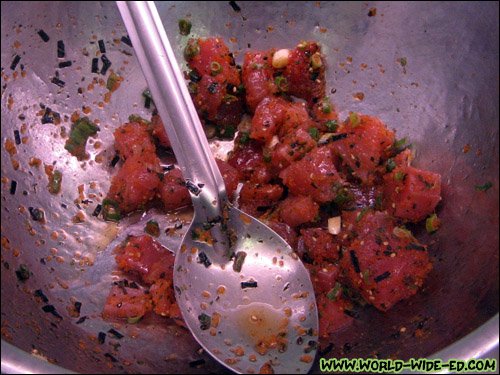 Masago is already an escape from the norm of “standard” poke ingredients, but furikake on top of that? Combine that with green onions, sesame seeds (which may be part of the furikake), shoyu maybe?, and choke sesame seed oil, and you getcho self one winnah! 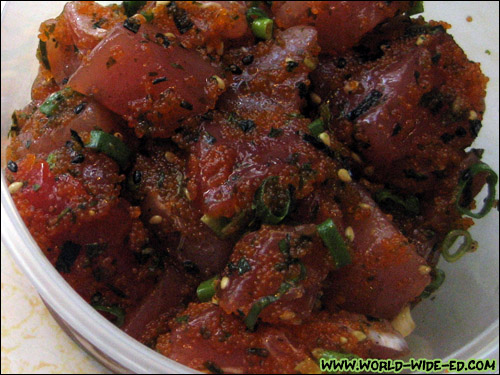 I’ve been trying to reach Yama’s Fish Market’s President Brian Yamamoto for a soundbite, but da buggah is hard to reach. If you’re out there Brian, holla, and I’ll add your quote here.

(UPDATE! Mr. Yamamoto emailed me, thanking me for the plug. Mahaloz!)

Until then, go give the Ahi Masago Poke from Yama’s a try, but be sure to save some for me kay? 🙂

Golden Mart
Not too many people know about this hidden gem in Mililani, but it’s quickly become one of my all-time favorite places to get my poke fix on (like Donkey Kong). 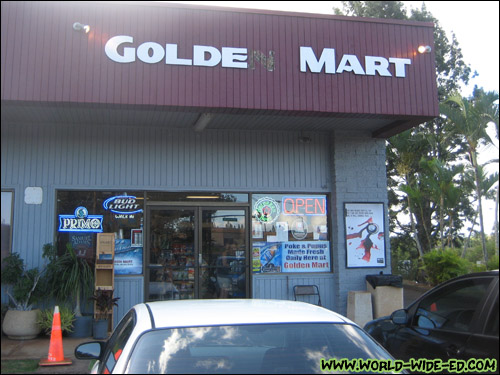 Outside Golden Mart in Mililani

Located in a small strip mall on the Mililani Golf Course side of Kamehameha Highway (across Mililani Shopping Center), Golden Mart sells what you’d traditionally find at a local mini mart like snacks, beer and cigarettes. How they separate themselves from the pack however, is their mouth-watering selection of hot foods, boiled peanuts, and poke. 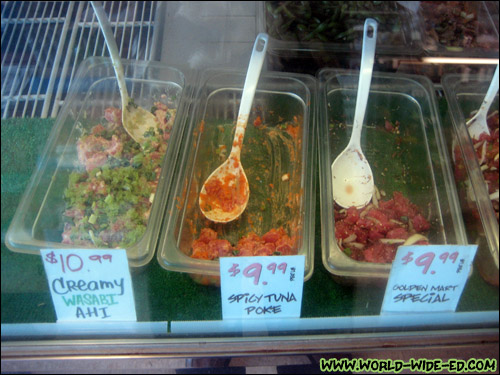 Employee Cori, and owner Julie Miyatake, who doubles as a USPS employee, both agree that Fridays are the best days to come if you’re looking for poke as the entire display case is filled with the different varieties they carry. My personal favorites are the Creamy Wasabi Ahi Poke… 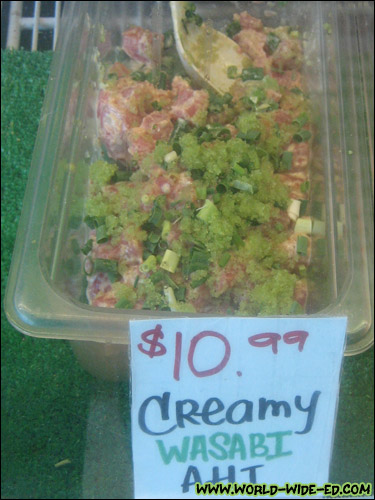 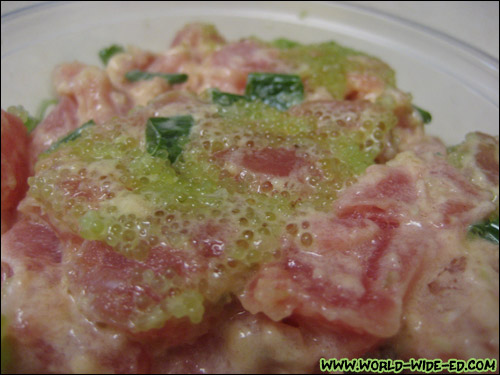 … and the Golden Mart Special. 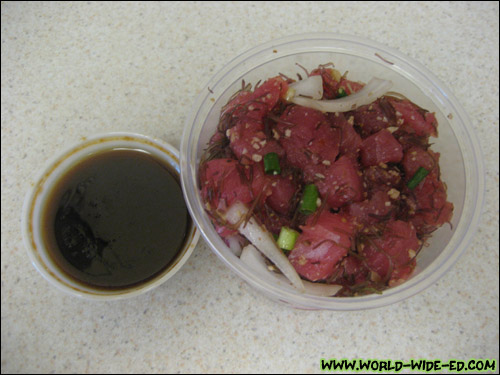 Golden Mart Special with the special sauce on the side -$9.99/pound 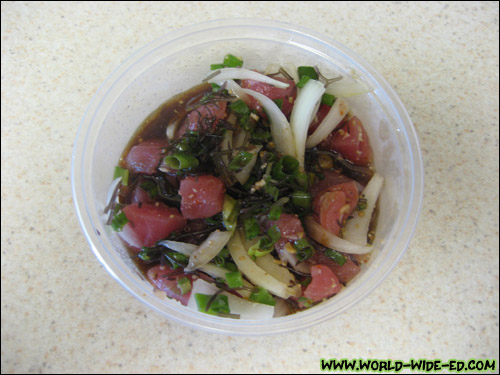 Golden Mart Special with the special sauce inside

Although, I’m not a fan of wasabi (I don’t even use it on my sashimi/sushi), the Creamy Wasabi Ahi Poke brok’ da mout’! How they make it is still a mystery, but if I had to guess, I’d say the tobiko-like topping (they’re green!) is filled with (or marinated in?) wasabi flavoring, while the rest of the poke is mixed with mayo (and wasabi?) in a creamy ahi sorta way. 😛

For good measure (and since I’ve got the photo 😉 ), here’s also a shot of Golden Mart’s Spicy Tuna poke for kicks… another winnah! 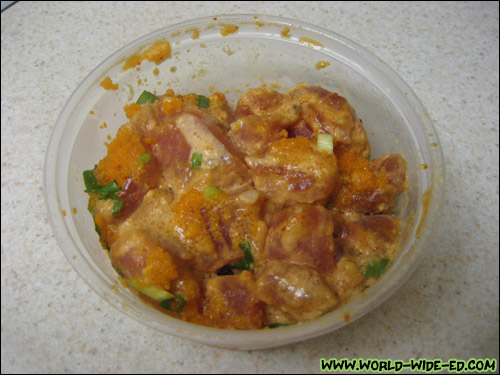 Poke Stop
Chef Elmer Guzman, a graduate of the Kapiolani Community College Culinary Arts program, has trained under Alan Wong, worked as a sous chef under Emeril Lagasse, and was the Executive Chef at Sam Choy’s Diamond Head Restaurant before opening his two Poke Stop locations (one in Waipahu and one in Mililani Mauka).

In addition to serving up “gourmet food at plate lunch prices” (their catch phrase), Guzman and company offer a bevy of poke to live up to their namesake. Some of their “must tries” are the Sweet Onion Ahi poke, the Blackened Ahi poke, the Furikake Salmon poke, the Ginger Scallion Shrimp poke, “Da Works” Oio poke, and my personal favorite, the Spicy Creamy Ahi poke. 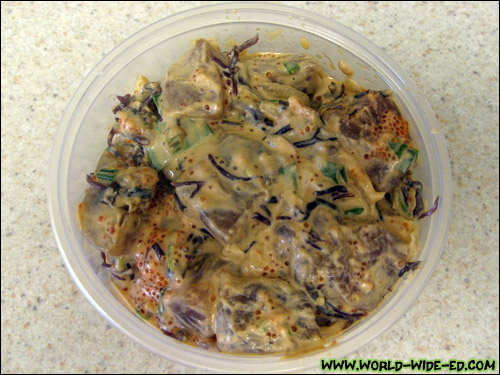 And, to my neighbor island bruthas and sistahs, no worries. I gotcho back! Here’s a little Honolulu love to The Fish Express in Lihue, Kauai. 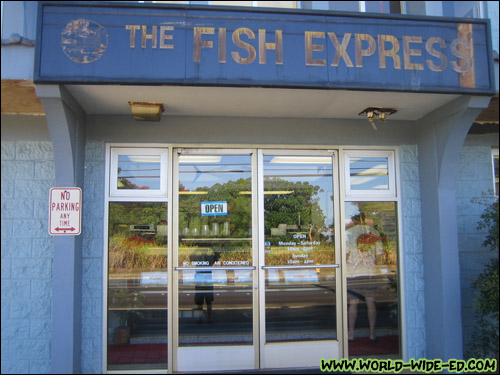 Outside The Fish Express in Lihue, Kauai 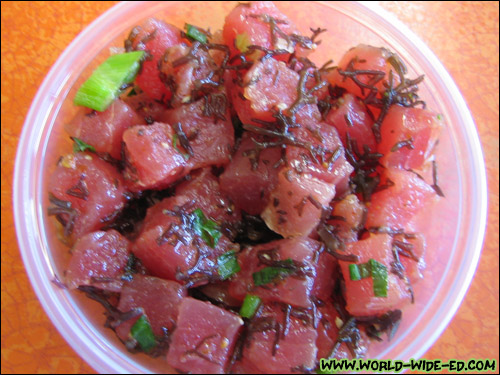 Alas, I’ve been tasked to make my poke for a New Year’s family gathering, so here’s a lil’ step by step action that will 1) help you if/when you make your own batch and 2) help to refresh my memory! LOL! Enjoy! 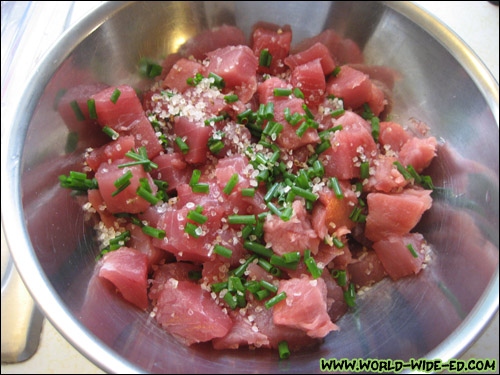 Diced/Cubed Ahi blocks with Hawaiian salt and green onions added (props to Ryan Moriguchi for reeling in the fish!) 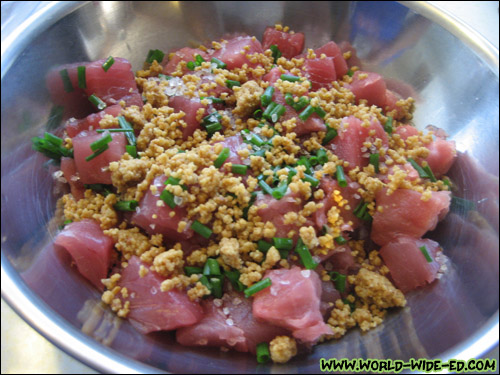 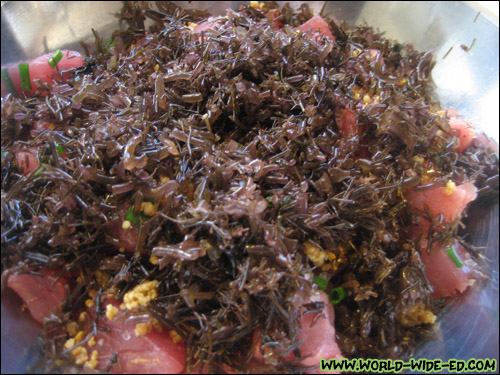 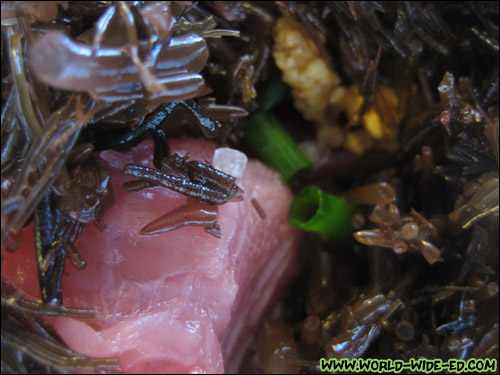 Close up of each portion greeting each other 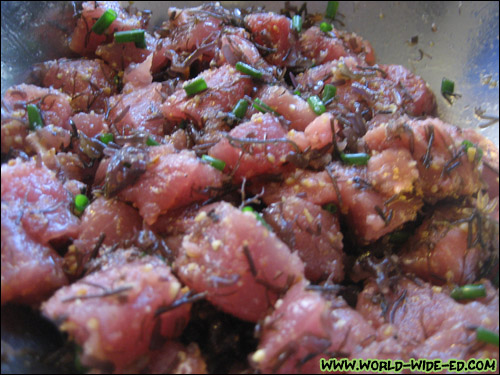 Everything mixed together with sesame seed oil and shoyu

If you have any hook-ups/connections to any of the places above, holla! I’d love to interview them! If you have any poke (dish) suggestions for the above as well, or new locations altogether, feel free to let me know in the comment area below!