With the rarefied (cold) air we’ve been facing these last few months, I thought now was as good a time as any to feature one of my favorite local style saimin spots to help keep us warm…

All my life, I grew up a townie. Living in the Salt Lake, Pensacola, Punahou, Kahala and Hawaii Kai areas, I was spoiled by the sun and all its glory. With parks and beaches always just minutes away, cold weather was as foreign to me as mouthwash is to a Maltese.

After working in the higher elevations of Central Oahu for almost 10 years now, I’ve come to realize that there actually is this thing others refer to as seasons. Not quite winter snow, spring colors, summer heat and fall leaves, but “hot around June” and “cold around December” is about the extent of it.

Aside from “bundling up,” which in Hawaii means long pants and a long sleeve, the next best thing you can do to battle these “extreme” conditions is to eat or drink something warm. So why not do both with noodles and soup? 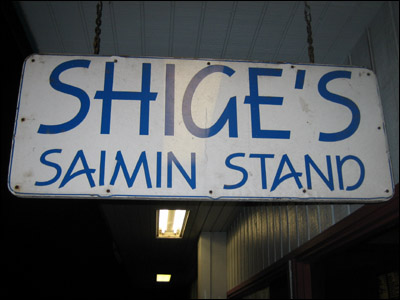 Located in the heart of Wahiawa, Oahu, Shige’s is, to me, the best local style saimin around. Notice how I said “local style” though? There is a distinct difference between local style saimin and Japan kine rahmen and comparing the two is like comparing apples and oranges. But on the real, Shige’s, on either list, is in my top 3.

Note: Apologies to those who love Hamura’s in Kauai or even some of the ones I haven’t been to yet like Sam Sato’s or Hanafuda in Maui or Nori’s in the Big Island… Shige’s rules and everyone else drools. 😛

At Ross and JoAnn Shigeoka’s shop, their trademark flat noodles are actually homemade and made fresh daily. Initially, I was simply in love with the saimin and tasty soup base, but after learning that the noodles were homemade, I grew another layer of appreciation for this island specialty.

Another one of the pleasant delights of Shige’s is their hours. They close at 10PM during the week and stay open ’til MIDNIGHT on Fridays and Saturdays. If you’ve got that late night craving/itch, they’re ready and open for you and if you’ve never tried Shige’s before, you now have no excuse. 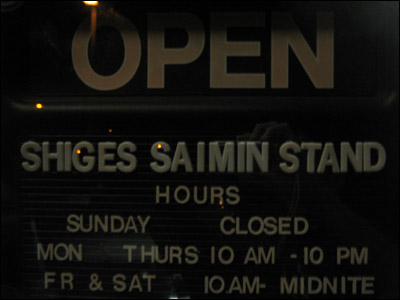 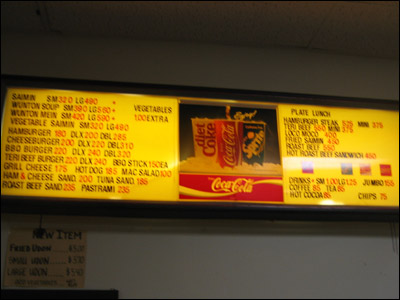 Shige’s menu is quite simple. For saimin, you’ve got your choice of their regular saimin, wunton mein or vegetable saimin in two sizes: small and large. They’ve got other items including burgers, sandwiches, bbq sticks and select plate lunches, but to me, the saimin is the way to go. Going to Shige’s and not ordering saimin is like going to McDonald’s and buying a salad. Borrrrrrring!

My personal favorite is their large wunton mein. Unlike those other noodle shops around town who seem to dominate their saimin dishes with toppings rather than noodles, Shige’s is quite generous with their noodle portions. I find comfort in knowing that when I leave Shige’s, my hunger will be completely and utterly satisfied. 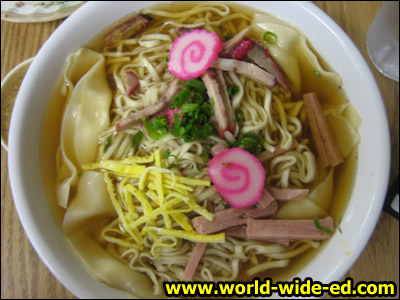 If I am feeling really daring, I lose the battle of the bulge and splurge on a homemade hamburger as well. Dem buggahs probably raise my cholesterol by 50 points, but the soft, buttery bun and lusciously juicy patty lure me in with their inviting ways. 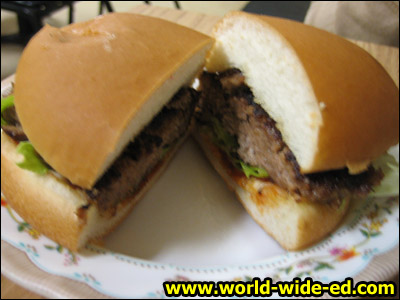 The best part of the entire Shige’s experience is when you receive your bill. All dishes retain their old school prices and fall under $6, and, depending on the size of your party and your appetite, your total usually never exceeds $20! 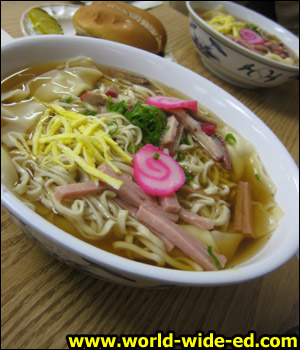