Anyone who knows anything about me, knows that my love for ramen runs deep. It borders on obsession. So much so that I’m convinced my mom cut her milk with ramen soup before popping the bottle into my mouth.

So it was a no-brainer to follow up my popular “Poke Paradise” series with this here Ramen Quest, a pursuit for the perfect bowl of ramen, right here in Hawaii.

Now when I say ramen (or rahmen / ラーメン as we Nihonjins like to call it), I’m not talking about the localized interpretation of it referred to here as saimin (no offense saimin lovers). I’m talking about the hardcore, straight from the muthaland kine noodle and soup combination that you fantasize of. I’ve tasted some of the best there is in Japan, and have been living to replicate that euphoria ever since. (See, I told you I was obsessed! 8) )

First up is Yotteko-Ya, located on the west end of McCully Shopping Center (opposite Fook Yuen). 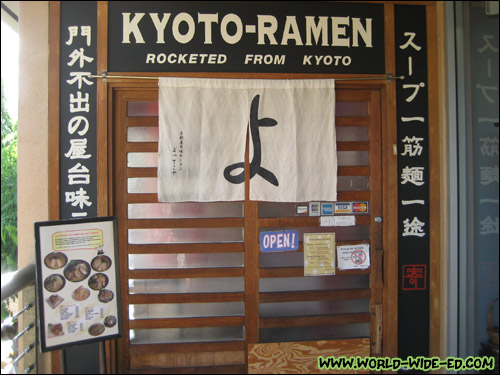 The specialty here is their Paitan soup base, which is described as a “richer, more flavorful chicken & pork based broth” and simmered for hours. In it, swims their perfectly cooked, al dente (Japanese style) noodles and homemade chashu pork, along with green onions, seaweed and sesame seeds. 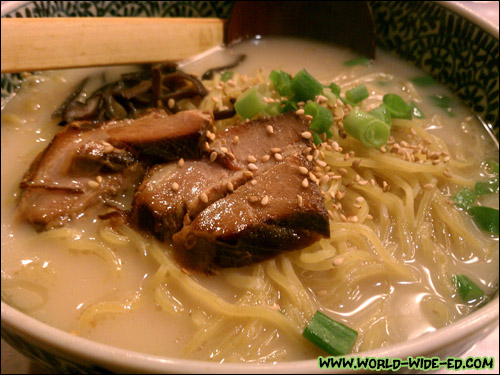 They also have an amazing Chashu Gohan (which includes chunks of chashu similar to the one in the ramen) that my wife goes absolutely gaga over. 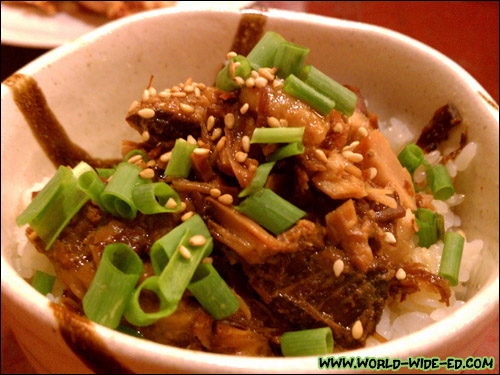 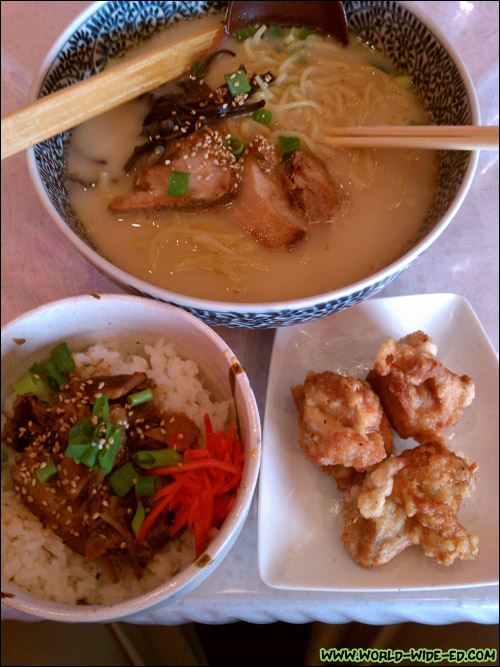 It should come as no surprise that the ramen I featured first in this series is a franchise straight from Japan. In fact, during a trip there in ’08, we actually went to the one in Odaiba. 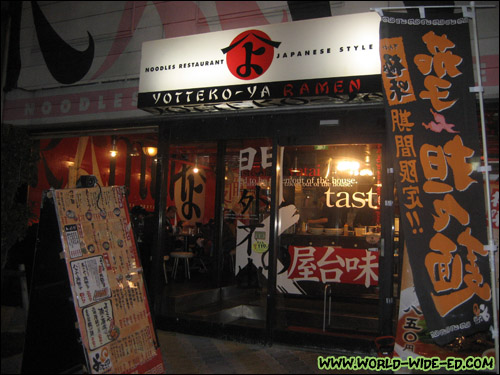 Here’s a look at what the Chashu Ramen looked like there. 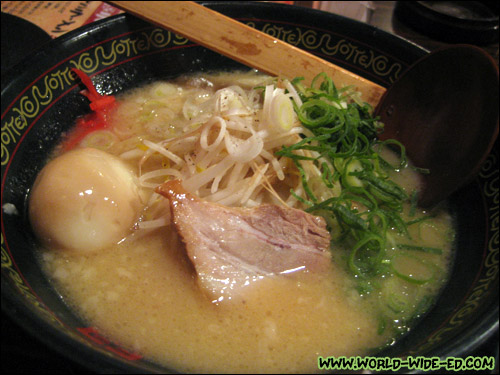 I first covered our next spot back when they were located in Waikiki. 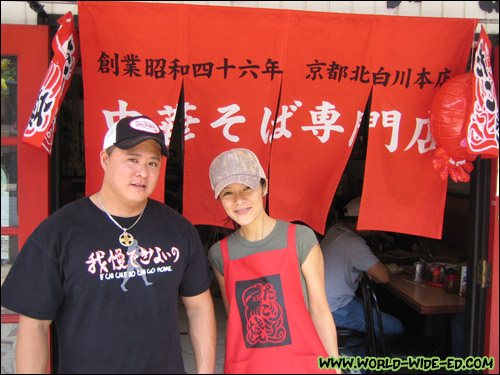 The restaurant is called Tenkaippin Ramen (which is also a franchise straight from Japan) and is owned by Scott Suzui and his wife Mayumi. If you think they look familiar, they have since become local celebrities of sorts, thanks to their show on OC16 called “Ultimate Japan”.

This is my go-to restaurant whenever I’m in the area, and I usually like to bring along a friend or two. On this occasion, I brought my boy Bari who seems to be enjoying his bowl of ramen just a little too much. 😛 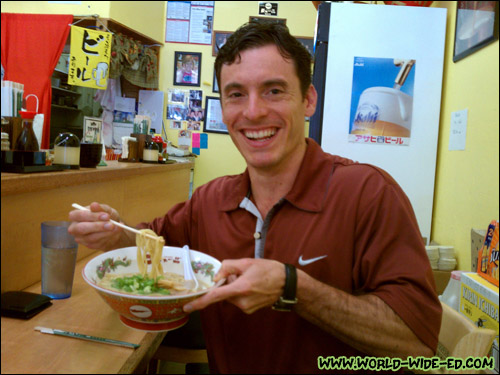 Similar to Yotteko-Ya, Tenkaippin is known for their soup base (known here as kotteri) which is accomplished by stewing chicken and vegetables for over 10 hours. Most ingredients are actually flown in fresh from Japan too! 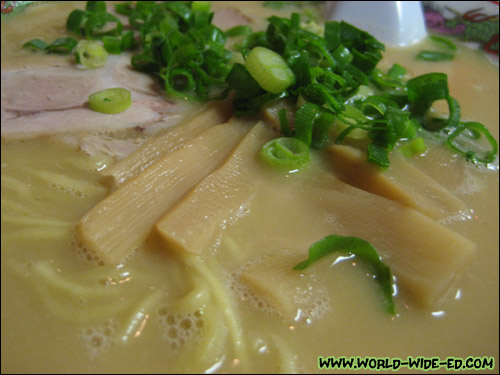 Here’s a peek at what it actually looks like to scoop a mouthful of noodles from this thick, kotteri soup base.

Video of Kotteri Ramen from Tenkaippin’s

I had to fly all the way to Waikoloa on the Big Island (FBI!) to get this next bowl of yummy goodness. It’s the D.K.’s Crab Ramen from Sansei Seafood Restaurant & Sushi Bar (Queen’s MarketPlace, Waikoloa Beach Resort). 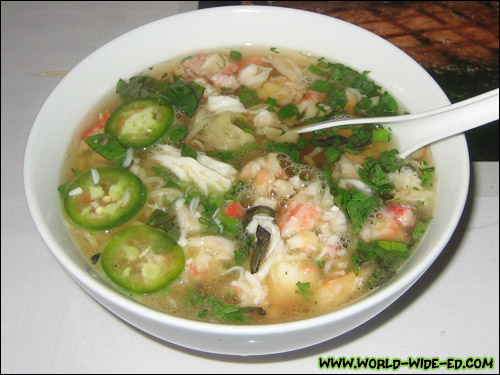 One word of caution. After tantalizing our taste buds with this one while on vacation at Waikoloa, we were excited to have it again (and again) at the Sansei closer to home (Waikiki). It was a HUGE disappointment. It did not come close to what we remember enjoying FBI-style, and, if you take a look at the photo below from Sansei Waikiki, you’ll see that it looked nothing like it either. 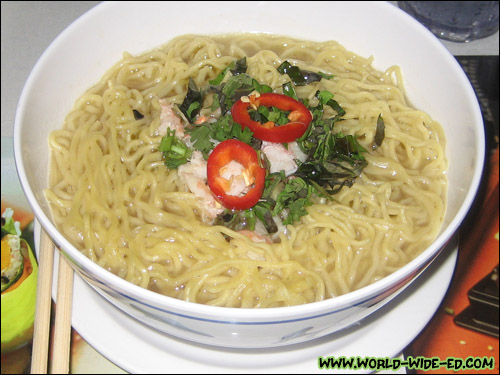 We actually tried our luck again on a trip to Maui, and the one at the Kapalua Resort turned out to also be a letdown. 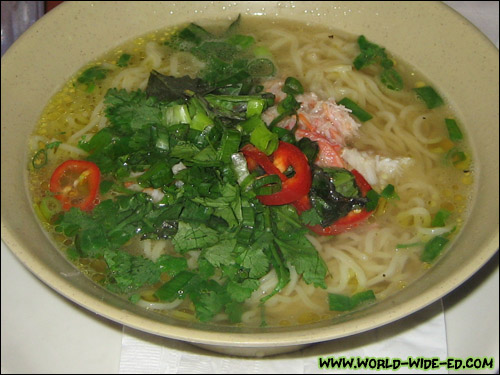 We’re actually afraid to go back to try the one at Waikoloa in case it was a McDreamy, one time (all-stars-aligned type of) thing. Sansei peeps, if you’re reading this, what’s the scoops?

And finally, talk about good timing… Shirokiya is in the middle of their “Best of Japan: Ramen & Gyoza Festival”, where they bring in popular ramen (and gyoza) vendors from Japan to be featured at their new Yataimura area for two weeks at a time.

The first in the series (featured from 08/23-09/05) was Menya Ifudoudou Ramen from Osaka who served 7,658 bowls during their two week stint! They presented their Kuroton Shibori (dark) and Akaton Shibori (spicy/red) options. Here’s a look at both: 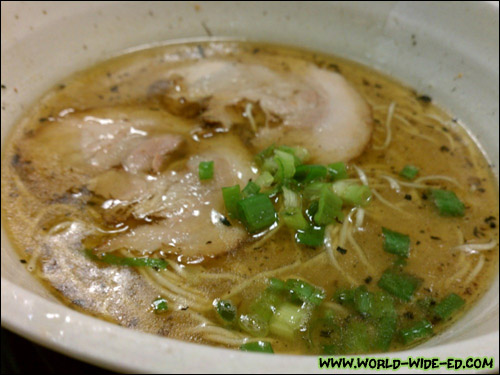 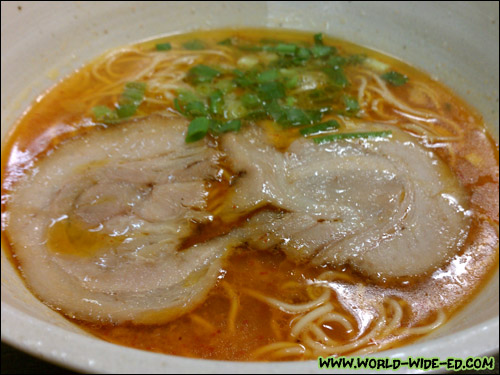 I don’t know if it was because it was the last day of the series and they were running low on noodles, but the portions were REALLY skimpy.

The second in the series (featured from 09/06-09/19) was Manshuya Ga Ichiban from Fukuoka who served 9,619 bowls of their “Original” Tonkotsu Shibori Ramen. Due to my crazy life as a new dad, I missed this series, but my buddy Rick Nakama was able to check it out (three times!). Here’s his Takana Shibori bowl: 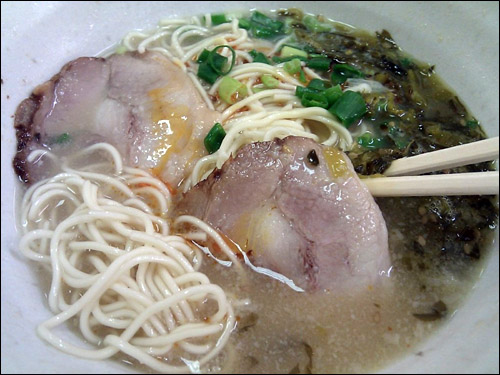 Rick’s main complaints were about the quantity (again) and the inconsistency of the ramen noodles and taste.

The third in the series (which is currently being featured as I write this – 09/20-10/03) is Hakata Chouten from Fukuoka. I was most excited for this because some of the best ramen I’ve ever tasted in Japan came from the Hakata area in Fukuoka. 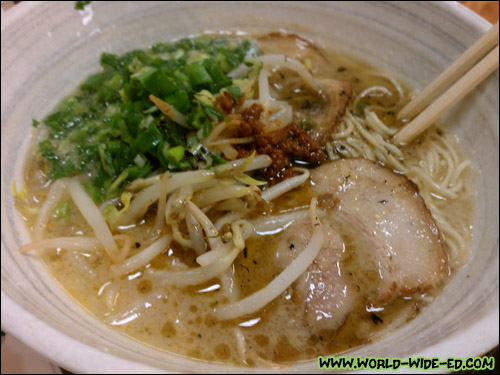 The soup base was pretty tasty, but, again, the quantity was very minimal compared to what we had to pay: $10.95! 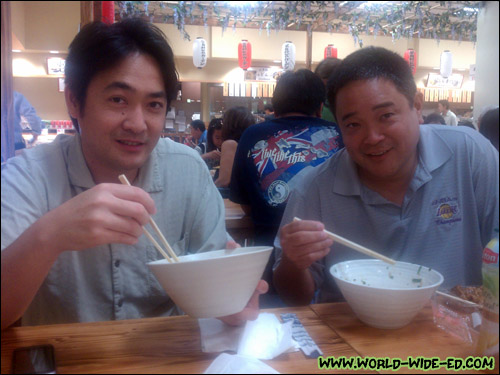 Rick Nakama finishing his bowl while Russ Sumida “poses” with mine. 8)

The fourth in the series happens from October 4th through the 17th and features Hokkaido’s Sapporo Menya Yoshiki who will have three choices of soup base: shiro (white), kuro (black) and aka (red). Following that will be Fukuoka’s Hide Chan Ramen from October 24th-November 6th.

So there you have it. Some interesting options for ramen here in Hawaii right? And that was just part 1! I still have at least 4 more juicy parts to this series (including Gomaichi, Goma Tei, Menchanko-Tei, Chinpei, Kiwami, etc.), but if you have any others suggestions on where I should hit up, holla atcho boy! Shoots!