Doesn’t allium sativum sound like some potent ingredient listed on the label of some dangerous cleaning ingredient? Well, it’s potent alright, but believe you-me, it’s far from dangerous. In fact, it’s wondrously edible and delectable at that, and there are three “just gotta” reasons to ingest this here allium sativum: 1) for its medicinal value(s), 2) the notion that it wards off evil and 3) Sugoi’s!

OK, ‘scuse the ambiguous opening paragraph. If you know exactly what I’m talking about, then you’re either a plant expert or a psychic. Either way, I should probably take a few steps back and attempt to clarify some thangs.

Allium Sativum is a species in the onion family, more commonly known by its recognized name of garlic. This tiny, but powerful bulb is used to prevent heart disease and improve the human immune system, and may even aid in cancer prevention. In addition, there is a superstition that says that if you wear garlic or hang it from notable locations (e.g. windows, doors, etc.), it will protect you from evil, vampires in particular.

The vague “Sugoi” reference in the paragraph (which, translates to “wow” or “great” or “awesome” in Japanese) actually eluded to Sugoi Bento & Catering, a popular plate lunch joint, whose specialty is… you got it, their garlic chicken.

[pause for gears in brain to start clicking]

Ahhh, all making sense now eh? Now that we’ve got that squared away, let’s profile “Sugoi” and their famous eats now shall we? 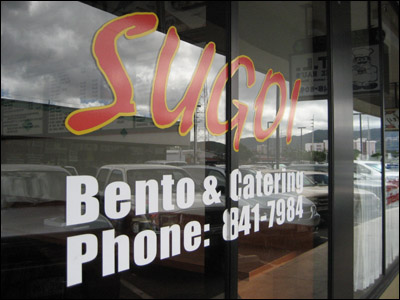 Located in the City Square Building in Kalihi, this local hotspot has been serving up lip-smackin’ chow to satisfied customers for nearly 7 years. Their #1 seller, by far, is their garlic chicken, which has won numerous awards, including the “Best Plate Lunch” in the annual Top 100 Restaurants on Oahu publication (Honolulu Advertiser) for 4 years in a row, “Best Chicken Plate Lunch” on the island by Lyle Galdeira’s “Cheap Eats” on KHNL News, 3rd Place for “Best Bento” in the 2006 Best of the Best awards (Honolulu Advertiser). 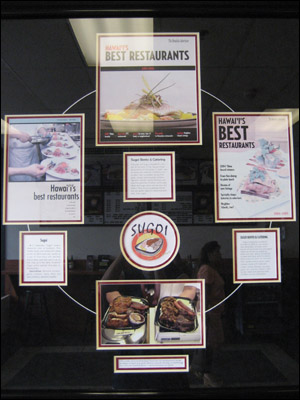 They also won “Best Mochiko Chicken” honors by Chef Sam Choy and gained national notoriety when featured on two shows on the Food Network: “Secret Life Of… Luau” and “Surf and Turf.”

In other words, making up your mind on what to order there is, well, so easy a caveman can do it (sorry GEICO).

However, if you’ve got a hot date with a vampire tonight or garlic just ain’t your cup of tea, they’ve got a bevy of items to choose from off their sizeable menu. 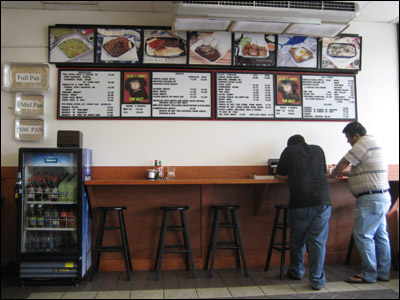 (! – If you’re not in the mood for garlic, but still want to get a feel for their delish chicken stylings, try one of their other prepared poultry options: spicy, mochiko or sesame. They are made the same way as the garlic chicken, without the need for a breath mint. My personal favorite is the sesame chicken in the bento.). 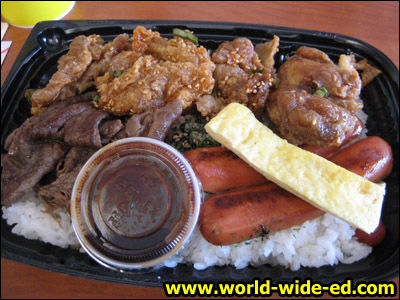 Local boy Zachary Lee is the owner of this great/awesome/wow place, and his kind-hearted, appreciative, good nature is very refreshing. He’s probably going to kill me for publishing this part of our email conversation, but, I wanted to give you an idea of what kind of guy he is:

“That’s really nice of you to showcase Sugoi, I can’t thank you enough. I really like what I do, and it’s nice to see so many customers come to my restaurant, and leave with a happy experience. I try to create a positive environment with my staff, I really feel that is where it starts.”

Keep in mind that this wasn’t part of the interview. It was just informal chit-chat before the real deal. Makes you wanna give him a great big bearhug now don’t it? 🙂

OK, all together now… 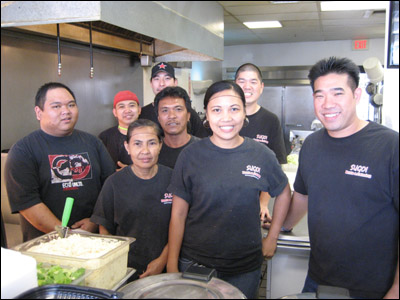 Zack Lee (far right) and his staff at Sugoi’s

Before you get all mushy on me/us, let’s continue with our interview.

We’re both baseball boys (he at McKinley and I at Kaiser) so he knew a lot of guys from my former team. You know, those who actually played. *grin* And, as I was writing this, a co-worker of mine randomly walked into my “office” and said “Eh, Zack! You know him too!? Cool guy yeah?” The point I’m trying to make is that this “cool” guy (who enjoys golfing, lifting weights, and collecting comics in his spare time) is well regarded and adorned by many.

On interview morning, Zack gave me a chance to try some items from his breakfast menu. I ordered the Two Eggs & (Fried) Rice with choice of Corn Beef Hash. The corn beef hash was prepared in a way I’ve never seen. Panko-crusted and deep fried. Sugoi! 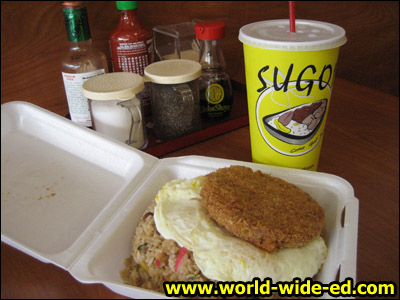 Customer favorites also include the Hamburger Steak plate ($6.75), Short Ribs ($7.50) and Yakisoba plates (from $5.95). Zack also tells me that their original bottled sauces (launched in 2005) are doing well:

“These 16-ounce bottles are sealed air-tight, contain absolutely no MSG, and will stay fresh for 6 months! Sugoi sauces go great with anything you love to eat; steak, roasts and ribs, to chicken, duck, turkey and ham, or drizzled over oodles of noodles… even as a salad dressing.” 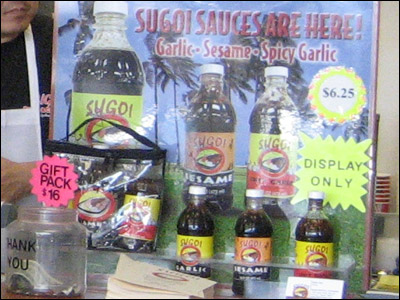 You can find these bottled gems at Marukai, Chili in Hawaii, Star Market, Wholesale Unlimited, Pat’s Island Delights, Menehune Mac Factory, Chit Chat, Foodland, Times, and Sugoi’s as well as their web site: www.sugoihawaii.com (they ship to the mainland US every week). Speaking of their web site, you can also use it to preorder food (must be made at least 2 days in advance), check out their menu and catering prices, and even contact them electronically.

Sugoi’s future, according to Zack, is to expand the menu and bottled sauces, and improve on their current location. Zack would also like to thank all of Sugoi’s great customers for the support and thank the great employees that make up the team.

So if you’ve never been to Sugoi Bento & Catering, why not give them a whirl? If you have, give them a return whirl. If this is one of your favorites, become a Whirling Dervish and give them many, repeat whirls. OK, that was lame, but you get the point. Go check um out a-ight?

If you need any more convincing, I’ve got three “just gotta” reasons for you my friends… 1) Wow, 2) Great and 3) Awesome!